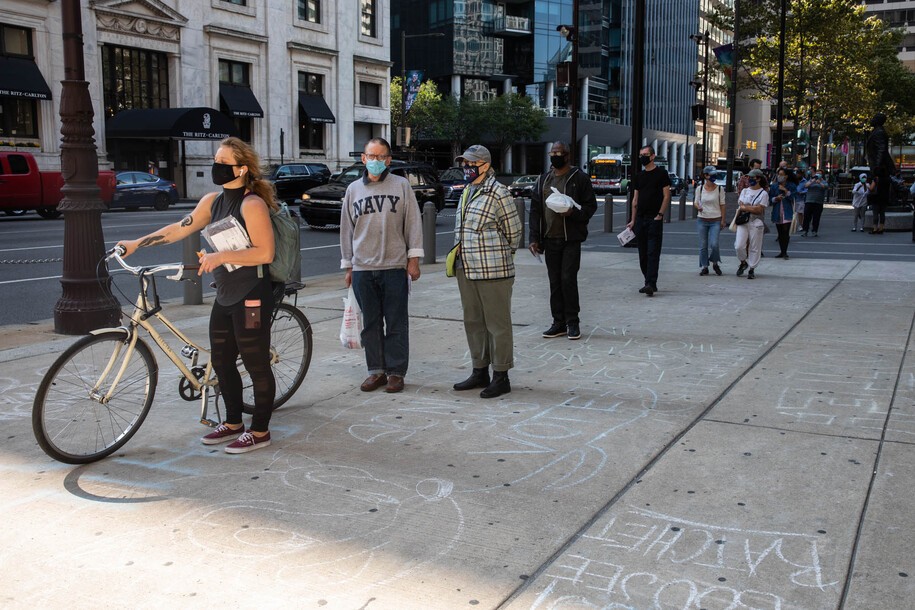 While the two major parties fight over the suburban white mom vote, groups like Make the Road Action in Pennsylvania are investing in turning out Black and brown voters across the country. Building on the political power and engagement of working class communities of color, including immigrants, organizers with Make the Road Pennsylvania use community outreach and political education to move their members to action.

Maegan Llerena, state director for Make the Road Action, challenged the way traditional campaigns typically overlook communities of color until the last minute. Make the Road Action recently launched a massive outreach campaign to engage 700,000 across 10 counties in Pennsylvania, organizing ventures in Reading, Allentown, and Philadelphia, according to Llerena. Hoping to tap into those voters who did not vote during the 2016 election, Llerena said her team works in 11 counties in total.

“We're trying to be as safe as possible,” said Llerena. “[We are] doing massive digital work in order to make sure people know who are the people to look out for when they do their mail ballot, or they [vote] in person.”

Like many organizations, Make the Road Action shifted operations due to the pandemic but has still been able to hold meetings in the three target cities to talk about the issues that matter to the communities they are organizing with, and what people need. Llerena noted that she has seen more efforts to engage Pennsylvania voters since 2016. This summer’s uprisings have also played a role.

“The uprising actually ignited folks to make sure that they exercised their right to vote, because the people that are in place right now in all different levels, not just the president, are the ones that are in charge,” said Llerena. “[It] has been a great talking point.  And where we can pivot people to conversations about how important it is to vote … helps keep people motivated.”

For organizations like Make the Road Action, organizing builds on community relationships, leadership, and conversations. In an emailed statement, Yumaira Saavedra, a member of Make the Road Action in Allentown, pointed to the current failures around the COVID-19 pandemic and the struggles facing millions of people across the country as a reason to organize voters to action this election.

“I’m deeply motivated to vote this year and encourage my family and friends to do the same, because with our votes we can take a stand for a full recovery for all, including access to health care and financial assistance and rent relief for all during the pandemic,” said Saavedra.

Highlighting Reading’s diversity, Llerena noted the elected representation did not reflect the community until the election of Mayor Eddie Moran in 2019, becoming the city’s first Latino mayor. “The work that we do is to make sure that people feel like they are represented,” said Llerena.

She pointed to the fact that representation needs to be more than having someone who looks like the people they serve. “It's nice to be able to see women holding seats, but [we need people who] will champion the stuff that is important to us [like] immigration, raising the minimum wage, and climate justice,” Llerena said. She also described the issues that were fresh on people’s minds due to the pandemic such as the housing and eviction crisis.

Make the Road Action also prioritized combating disinformation as a part of its outreach and organizing. Llerena cited the president’s false allegations of fraud around vote-by-mail as an area causing confusion and stress for potential voters combined with delays in mail delivery.

“We are trying to make sure that our canvassing team is answering all the questions,” Llerena said. “Our team is actually creating voting plans with voters … we're making sure that we have all the information so that when they have a question we can answer it right away.”