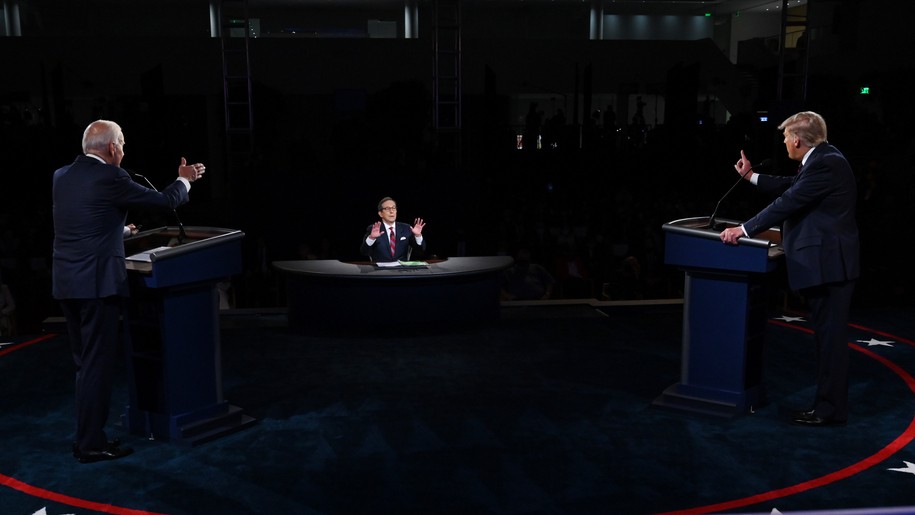 On full display during the first presidential debate, unchecked disinformation undermines the values of free and fair elections. Over 73 million viewers tuned in to Tuesday night’s debate. While it may be difficult to fact check some comments in real time, members of the news media in their commentary, hosting, and even debate moderation have an obligation to guide the public to good information.

“Spreaders of disinformation are poised to exploit this moment of uncertainty, already spreading lies and half-truths across the mostly unregulated space of social media platforms and other digital channels,” said Nora Benavidez, PEN America’s director of U.S. free expression programs, in a press release. PEN America convenes journalists, organizers, and the general public for training sessions on identifying disinformation and recently launched a series of digital public service announcements as a part of the #WhatToExpect2020 initiative. In sessions such as “Trust in the Rust Belt”, Benavidez takes journalists through strategies for making tough calls in election coverage.

Chris Wallace, who is himself a journalist and an anchor for Fox News, infamously said fact checking is not his job as debate moderator. However, Wallace failed to retain any control over the 90-minute exchange during which President Donald Trump made numerous intentionally misleading statements about the electoral process itself. Wallace’s position was supported by the Commission on Presidential Debates.

But the media's proximity to the public elevates the importance of addressing disinformation, and understanding how media manipulation occurs can provide media outlets and journalists with new choices for how to approach coverage in a way that maximizes information and minimizes harm. Joan Donovan, research director of Harvard Kennedy School’s Shorenstein Center on Media, Politics, and Public Policy, compiled a guide about protecting civil society from misinformation and hate speech without making the problem worse. Identifying the 3Ds of combating disinformation as “detect, document, and debunk,” Donovan uses a five-stage lifecycle approach to understanding media manipulation. Donovan recognizes media manipulation as a pattern of activity, not simply a series of unfortunate events.

In the context of election coverage, leaving behind the horse race, game show style of coverage gives life to news and commentary that is both truthful and useful, and less likely to propagate disinformation. Prioritizing the appearance of being “fair to both sides” fails to recognize that the primary duty of fairness is actually owed to the public and the sanctity of democracy as a whole.

Changing the core value proposition in making judgments about approaches to covering disinformation provides media outlets, journalists, and commentators with opportunities to produce better content. Donovan wrote that the way in which information is relayed often matters as much as the veracity of the information. In some instances, journalists can get in front of disinformation.

“Prebunking is an offensive strategy that refers to anticipating what disinformation is likely to be repeated by politicians, pundits, and provocateurs during key events and having already prepared a response based on past fact-checks,” wrote Donovan.

Going deeper into how to challenge disiformation, Donovan suggested people take a “truth sandwich” approach that refutes the erroneous statement upfront and then follows up with specifics about the false or misleading statement and then more truthful statements. This way the issue is addressed but prioritizing the accurate information.

Josh Silver, co-founder and CEO of RepresentUs, called Tuesday’s debate an unprecedented moment in U.S. history with the election crisis moving into a “code red.”

“President Trump is hedging against a potential defeat by sowing widespread distrust in our elections as a pretense to contest the election,” said Silver in a statement. “If you’re not worried about a coup d’etat by this President, you’re not paying attention.”

RepresentUs is one of several nonpartisan organizations sounding the alarm about the continuous use of disinformation by the president in his reelection campaign. The organization recently launched the “Save the Vote” campaign encouraging voters to take steps to safeguard against election challenges in November. RepresentUs set forth six steps people can take to protect the vote this cycle, including demanding lawmakers respect the vote count, demanding election officials count every vote before demanding a winner, and committing to voting early.

The commitment to protecting democracy and providing objective truth must extend to addressing disinformation when and where it arises. “Now more than ever, these kinds of misleading narratives threaten voters’ sense of empowerment and their trust in our democracy,” said Benavidez. “We’re committed to doing everything we can to help communities have the tools to fight back.”