Olga, an immigrant from Chiapas, Mexico, has been working on dairy farms in Vermont for the past 10 years. She starts her days calibrating the machines and sanitizing the stable. Once that's done, she meets the cows, cleans their stalls, then brings them into the parlor to milk. She repeats this process with three more groups of cows, then milks the cows who just gave birth to calves. When the day’s milking is complete, she cleans up the dirt and grime left behind until her shift is over.

“Starting out, it’s really hard work,” Olga said. “But even when you’ve been doing it for awhile, it’s still hard. It doesn’t get easier.”

The difficulties of dairy farm work are compounded by the woes of 2020. COVD-19 led a number of dairy farms in Vermont to close down, leaving dairy workers like Olga worried about their health, safety, and employment. The contentious U.S. presidential election adds an additional layer of anxiety over the right to exist as immigrants in the country.

Despite the challenges faced during this moment of uncertainty, Olga feels a sense of security knowing that she cannot be fired and displaced without just cause. This protection, alongside the courage to demand fair treatment, is made possible because the farm she works on is part of the Milk with Dignity program.

Started by Migrant Justice, a migrant workers’ rights organization based in Vermont, Milk with Dignity is the first and only worker-led program designed to hold farmers, corporations, and suppliers in the dairy industry accountable for the rights of workers in their supply-chains through a legally-binding agreement. In an industry ridden with low wages, undignified housing, accidents, and fear of retribution by employers for speaking out, Milk with Dignity works to rectify these injustices.

The Milk with Dignity Standards Council leads the program’s enforcement and monitoring efforts to ensure that participants are compliant with its Code of Conduct. The program also includes bilingual “Know Your Rights” workshops, a 24/7 support line where workers can report violations and profit redistribution from buyers to debt-ridden farms.

“This program creates a structure where workers can be the frontline defenders of their own human rights,” said Will Lambek, a Migrant Justice organizer. “Rather than the corporate demand being this pressure to depress wages and working conditions, it’s now become a pressure to lift them up. That totally alters the balance of power on the farm.”

Migrant Justice was formed in 2009 in response to the death of young Mexican dairy worker José Obeth Sanitz Cruz who was strangled by his clothing when it was caught by a mechanized gutter scraper. Horrified by the workplace conditions in Vermont’s dairy supply chains, the organization began to build the Milk with Dignity program in 2014. In 2017, Ben & Jerry’s became the first dairy corporation to sign their agreement.

Two years later, Milk with Dignity has achieved numerous successes documented in a progress report released this year in early October. So far, the program has protected 262 workers on 64 farms, invested over one million dollars into workers’ wages, bonuses, and housing improvements, resolved 155 complaints of code violations, and completed 105 farm audits.

Milk with Dignity also played a role in protecting workers from COVID-19. It distributed health and safety information to workers and provided them with paid sick leave and personal protective equipment. Vermont’s immigrant dairy farm workers demanded and won $5 million dollars worth of coronavirus relief payments as well.

Teresa M. Mares, an anthropologist at the University of Vermont, documented the challenges Latinx dairy migrant workers living near the U.S.-Canada border face in her book, Life On The Other Border: Farmworkers and Food Justice in Vermont.

In her book, Mares underscores the systemic injustices embedded in Vermont’s dairy industry which hurt undocumented workers. She finds that undocumented workers live in constant fear of surveillance and deportation by Immigrant and Customs Enforcement (ICE) border patrol agents, stuck at home with no transportation. Unable to access public life with ease, workers are dependent on informal social networks for basic life necessities like food and medications. As a result, undocumented workers face food insecurity, diet-related disease, and mental illness.

Like undocumented workers, women also face unique challenges in Vermont’s dairy industry dominated by young men. Women on farms unprotected by Milk with Dignity have contacted Migrant Justice to address acts of sexual harassment, attempted rape, and life-threatening intimidation. The women are unable to seek help from law enforcement due to their immigration status. Women also fear being fired if pregnant and risk juggling a heavy work schedule with caretaking.

The rising popularity of the organization’s efforts to protect workers came at a cost for its operations. Starting in 2014, Migrant Justice noticed a pattern of its leaders getting arrested. The arrests escalated between 2016 and 2018 when over 40 people with connections to the organization were detained by ICE, twenty of whom were actively involved in the group's organizing efforts, said Lambek.

Suspicious over this pattern, Migrant Justice immigrant activists sued ICE in 2018 for conducting a multi-year surveillance operation on the organization. A FOIA litigation confirmed this allegation, uncovering evidence that ICE sent a confidential informant to infiltrate meetings, wrote dossiers and intelligence reports on its members, tracked their social media pages, and attempted to access an organizational email. Two years later on Oct. 27, Migrant Justice settled the lawsuit which confirmed that ICE cannot deport the immigrant activists who sued—a major victory for the organization. 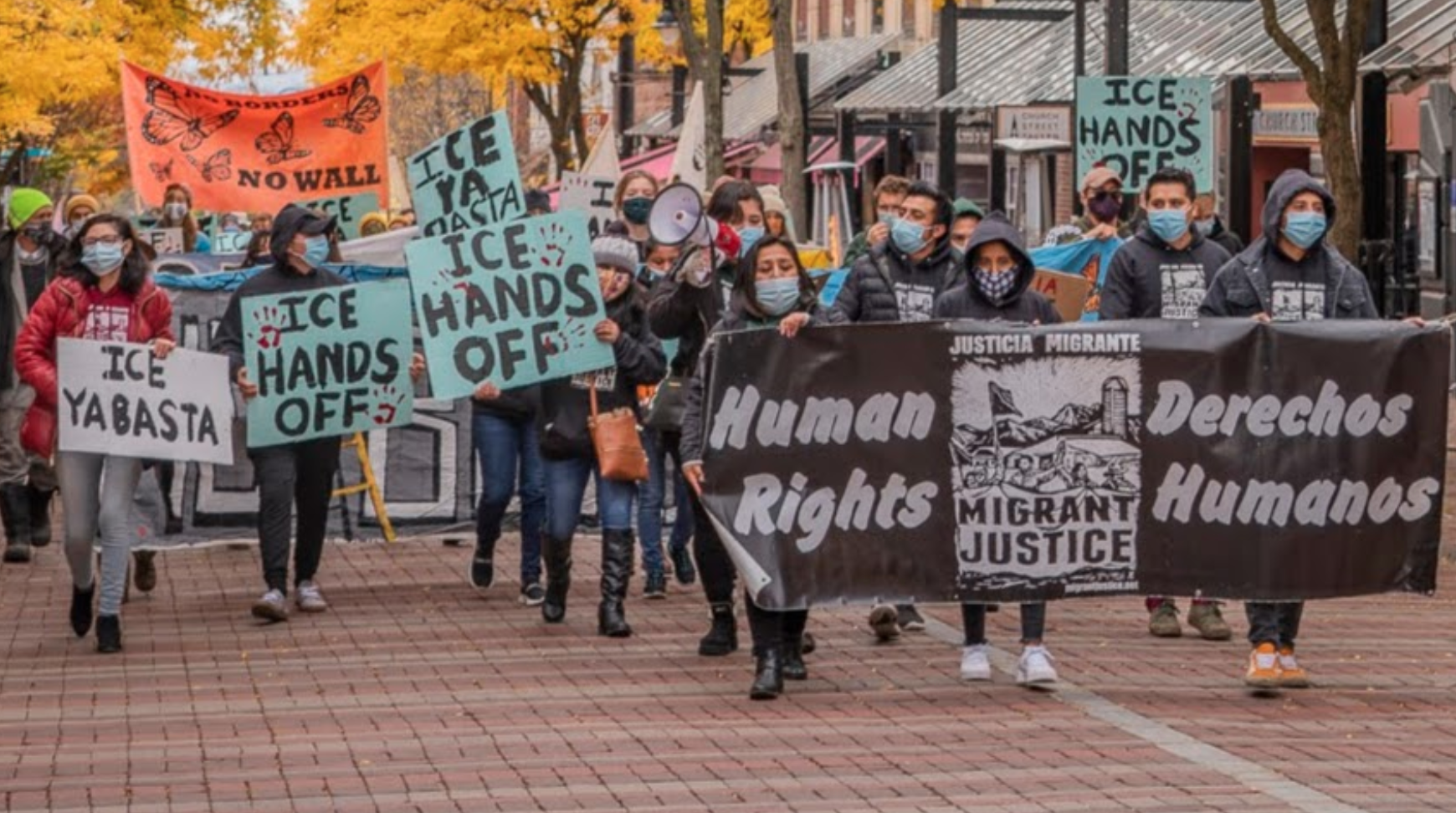 “With this settlement, we have shown that we won’t back down in the face of ICE’s abuses,” said Victor Diaz, one of the plaintiff’s of the lawsuit, during a celebratory rally in late October. “They have tried to silence us by terrorizing our community and targeting our leaders, but we are here today to say that we will not be silenced.”

“Over the past four years, we have learned to control our fears,” Olga said. “But Trump keeps threatening to deport us. We know the work ahead of us and have shown that we can outlast him.”

The accumulation of Migrant Justice’s successes in the wake of a pandemic and national reckoning with racism is a testament to the power of worker-led organizing. Moving forward, the organization is focused on its campaign to pressure Hannaford—a Northeastern supermarket chain who has yet to formally engage with the organization—to join Milk with Dignity.

Now a committee member of Migrant Justice, Olga imagines a promising future for the program.

“Our hope is that more farm workers are going to be covered by the program so they can have the same benefits that I have now. There are too many people who are still left behind. We’re going to keep fighting.”

Aaron Mok is a Chinese American freelance multimedia journalist who covers climate, agriculture, labor, and their intersections to social justice. His work has been featured in Civil Eats, Politico, GreenBiz, Food Tank, and more.
Give today and support BIPOC-led journalism!