This narrative in the Unheard Voices of the Pandemic series from Voice of Witness is published with permission, as part of a partnership with Prism. Interview and editing by Ela Banerjee.

Oscar Ramos teaches second grade in Salinas, which is the capital of the Salinas Valley and known as the “salad bowl of the world.” The majority of his students are the children of farmworkers, who continue to work during the pandemic. Oscar grew up in a labor camp near Salinas and worked in the fields until the eighth grade.

This is my 24th year teaching and I’ve never experienced anything like this. Right before coronavirus, our school district was at the end of our second trimester. We were assessing the students in reading, writing, and math. We were getting ready for parent conferences and report cards. But in early March, schools shut down and we weren’t able to do any of that.

I’d been watching the news on a daily basis and kind of monitoring the situation. A lot of our kids watch the Spanish-language news with their parents. It would scare them, so they’d come into class in the morning and ask if I knew what the coronavirus was and if I knew that people were getting sick. I would tell them that, yes, I am watching the news, but I would steer them away from that conversation momentarily. I didn’t want to shut them completely down because that’s not healthy. I did give them opportunities throughout the day here and there to ask a question, but I didn’t want that to be the main conversation of the day.

I thought that school would be shut down at some point, but I didn’t know it was going to be so soon. The last day I saw my students in person was March 12. I was about to go to LA for a conference. On Thursday afternoon, I told them to behave and to help the substitute do other work with them. And the next day, Friday, the school district said they were going to shut down until further notice. I didn’t get to say goodbye.

Now we’re doing what everyone else is doing—Google Hangouts, Google Meets. Our school used some funds a while ago to purchase Chromebooks and iPads. So everyone has a one-on-one device. We had to distribute all this technology to the students and it took several weeks. And then we had the problem of the internet. Did they have access to Wi-Fi? And if not, what good would it do for them to have a device if they didn’t? Our district purchased hundreds of hotspots for parents so they can access Wi-Fi.

Some of the students are lucky because they have older siblings who already know how to use these programs. But those who don’t have those systems of support are the ones who are struggling and are the ones that we don’t hear from often, if at all. I have 25 students. When we first started doing Google Meet or Google Hangouts, I’d get six out of 25 students and then later it went to eight out of 25. Right now I’m at 11 out of 25.

We do have a list of students we haven’t been able to communicate with at all. Not once. It’s not an enormous list, but there were about 15 students out of 145 total second graders that we don’t know what happened to them and their families. They never came to pick up a computer. Sherwood is a food distribution center, but they never came to pick up lunches or school supplies or anything. We’ve tried calling their cell phones, both the mom and the dad. If there’s a home number and there’s no answer, no one’s heard from them. Two of those missing students are from my class. We don’t know where they went, if they left, or if they’re here and they’re just not communicating with anyone.

For the kids who can attend the Google Hangouts, at first they’re a little nervous and a little scared and there’s not much talking. It’s kind of like when the school year first starts, they come in and they’re very shy and quiet. But after a while they feel more comfortable and they look forward to the meetings. These are second graders. They do drawings and they put them up to the computer camera. They talk about their pets. It’s wonderful to hear them laugh and share stories. They miss school, their teachers, and their friends. They miss running around and yelling and recess. And they miss the lessons. They miss learning new things. 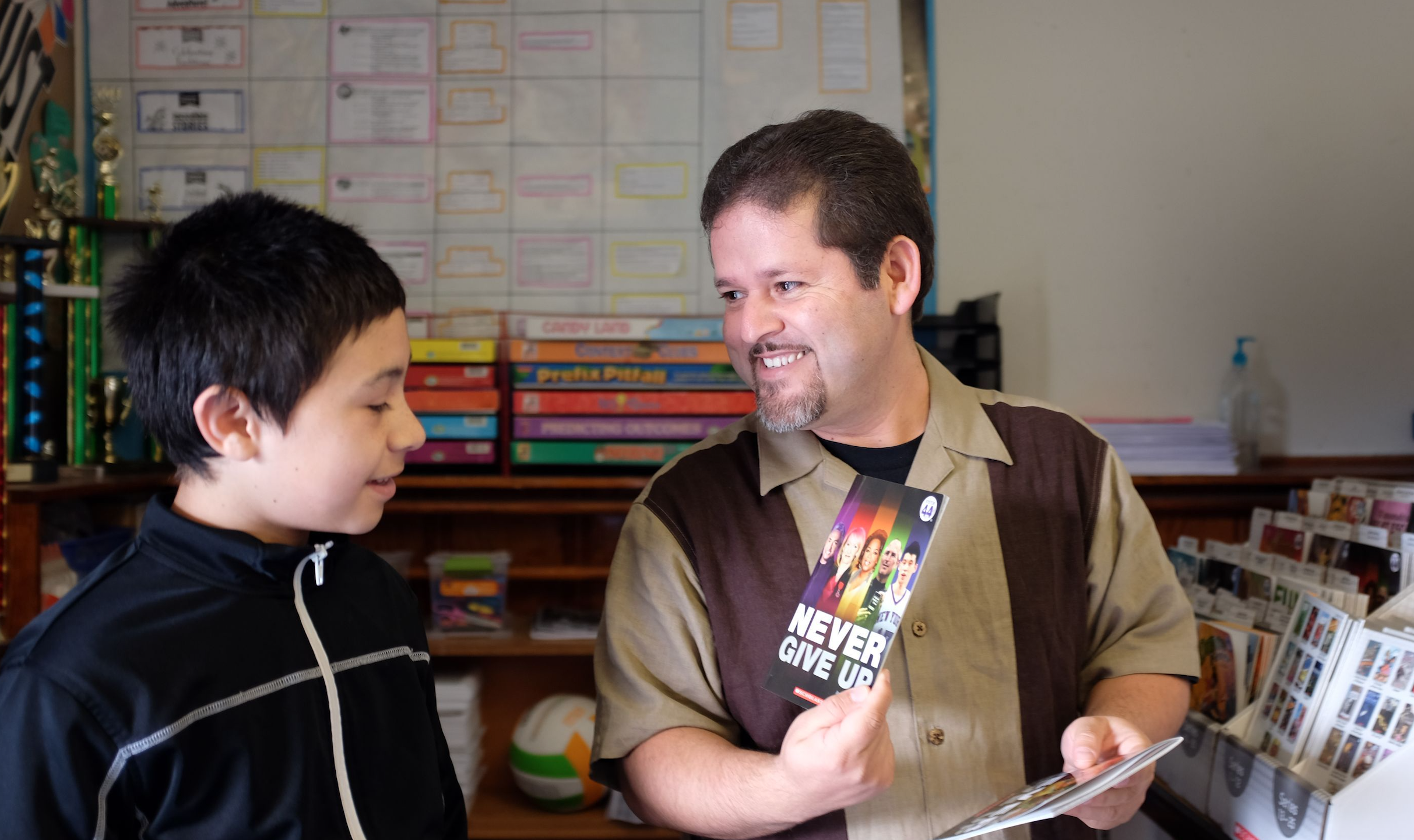 I miss being in the classroom with the kids. That’s 25 students, 25 different personalities, and I love every one of them. You know, you have the ones that love to share. You have those who are quiet but communicate with you in different ways, with the way they look, the way they act. They’re very, very kind-hearted. They care for one another. I just miss the conversations, the laughter, the questions when they say, “I didn’t understand that. Can you help me?” or “Can you repeat that?” That sort of relationship building happens when you’re in the same room. It’s not the same through a camera and a computer. I miss the little hugs they give you in the morning and the high fives when they’re going home.

Twice a week my colleagues and I meet virtually so we can collaborate and share our lesson plans. But these meetings on the computer—they are exhausting. You’re sitting on a chair looking at a computer and yes, you can see your colleagues, but it’s not the same as sitting in the staff lounge and having a conversation while you’re having a snack. It’s not the same as chatting with them after school about how their day went and what they’re going to do tomorrow and what we could share for future lessons. It gives me a headache. It hurts our eyes just to meet with the students virtually, to meet with our colleagues virtually, to have a staff meeting virtually, everything. I cannot stare at the computer for that long. It’s great to hear their voices and see their images, but we miss that human interaction.

I don’t know what idea people have about what teachers are doing now. But we’re working harder than before. We’re learning new programs and we’re teaching the kids how to use these new programs. We’re spending more time planning than ever, more time working than if it was just a regular day and it’s stressful. But we’re not going to let that show when we’re doing our class meetings because we want the kids to think that even though it’s different, we’re okay and they’re going to be okay.

When you’re seeing the kids and they can see you, you have to continue being yourself. You can’t show that you’re exhausted and that you’re tired of meeting virtually. It’s like a performer, right? They can be exhausted, but people paid money to go see a performer. And so whatever’s going on, they have to shut it off and go out there and perform. Well, with the students, it’s the same thing. If we’re sad, exhausted, and not really motivated, they’re going to see that. The kids do detect changes and if they’re not good changes, it’s going to hurt them. They’re not going to feel motivated. They’re going to feel like, “Well, if he’s feeling that way, then what about me?” So you have to continue being who you were in the classroom. You smile, you laugh, you joke. They can say, “That’s my teacher. That’s who I was with in the classroom.”

I had to tell the kids that the next time I’m going to see them in person, they are no longer going to be my students. They are going to be in third grade. And they were shocked. Their little faces with eyes wide open like, “What? How? Why?” I had to explain that they’re not going to come back this school year and that I missed them dearly. I did promise them that when they’re in third grade and they’re able to go back to school, I will call them all in during their lunchtime and we will have a fun lunch and celebrate that we’re all back to school and that we all get to see each other again. They liked that idea because they didn’t want it to end this way. Obviously, nobody did. But they’ll look forward to that and I look forward to that as well.

Oscar Ramos is a narrator in the Voice of Witness book, "Chasing the Harvest: Migrant Workers in California Agriculture."
Ela Banerjee is the community partnership coordinator at Voice of Witness.
Give today and support BIPOC-led journalism!