As people are joining with loved ones either virtually or in person, members of organizations like the Alliance of Families for Justice (AFJ) are finding community with one another in New York. In addition to pushing state officials to better protect incarcerated people, AFJ, a statewide advocacy group of family members with incarcerated loved ones, also offers support and guidance to one another. Typically the group meets biweekly via video conference, but on December 23 AFJ members joined together at the National Black Theatre in Harlem to create protest art.

The artwork included canvas paintings, watercolor, abstract drawings on poster board, and sculpture. Several of the sculpture pieces incorporated the interests of the AFJ members, like member Takeasha who works as a cosmetologist. She created hairstyles on salon mannequins with messages related to AFJ’s mission, including a cornrowed style with the word “justice” and “AFJ” etched in braids. Her daughter also contributed a piece: a family portrait featuring her mother drawn alongside a broken heart, her father behind bars with a low battery hanging over his head representing the lack of nourishment he was receiving inside, and herself writing a letter that read, “Wish I could be with you this Christmas.” Takeasha’s husband is currently incarcerated in a facility that has yet to resume visits. This season is particularly difficult for her family since her birthday is on Christmas Eve, and her husband’s is on Christmas Day.

AFJ plans to use the artwork for future rallies and online social media campaigns. The group often holds rallies in Albany in front of the state legislature or around the Governor’s office. AFJ also hopes that the artwork and the day’s event will draw attention to specific demands the group has for New York Governor Cuomo around offering incarcerated people basic protections against COVID-19 and expanding visitation to their families. 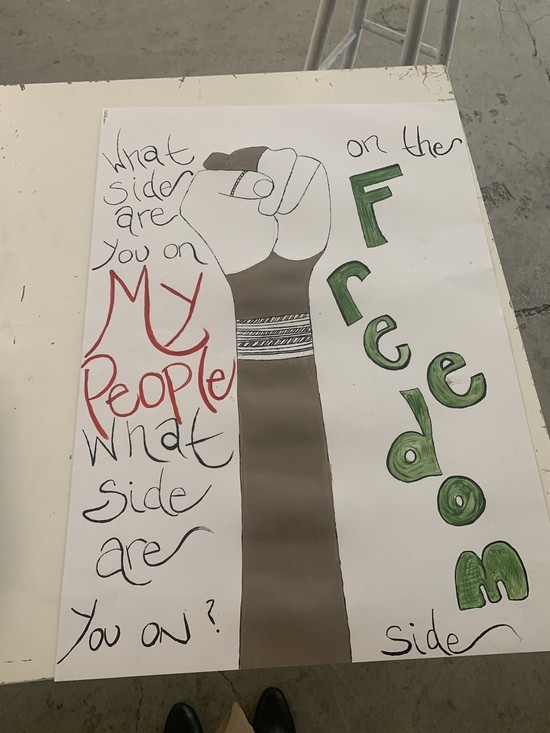 Among those demands is the reinstatement of the Family Reunion Program, which allowed some incarcerated New Yorkers to spend extended periods of time with their families in an apartment-style trailer off the site of the prison. Luceita, an AFJ member, told Prism that her family has benefited from the Family Reunion Program as her husband has served a 25 year sentence which has recently been extended an additional 15 months. The program, she said, “keeps [incarcerated people] feeling like they’re human again,” but for the past 7 months the Department of Corrections and Community Supervision (DOCCS) has suspended it.

That decision came amid a host of other restrictions as the pandemic took hold: between March and August, all 52 prisons within the state suspended visitations. 41 have since resumed visits but with heavy additional restrictions like shortened time, fewer family members, and fewer available dates.

Takeasha said that not only do these restrictions impact the relationships between those inside and their families, but they don’t even adequately protect incarcerated people from COVID-19. She said that facility staff are the ones primarily turning prisons into hotspots, and that she has heard of guards not wearing masks or social distancing from one another all while denying fresh PPE to those inside. Family members are also not allowed to send masks or give them to their loved ones during visits.

Takeasha also expressed concern about the lack of attention paid to the overall health of those who are incarcerated. “There’s no heat, hot water or warm meals,” she told Prism. “There’s no nutrients available to build their immune system.”

In a year that has seen so many Black lives lost, she said the added threat of the pandemic raging through prisons has left her “completely traumatized.”

“To have someone hold on to and harbor your loved ones shows that those in power are doing everything to promote death,” she said.

In addition to open and safe visitation for families and increased protections against COVID-19, AFJ is also requesting that the state resume processing marriage applications for people engaged to those inside just as they have for the rest of the state’s population. The group is asking that Governor Cuomo and the DOCCS release a detailed public plan for meeting these demands and provide ongoing updates as they are being implemented. 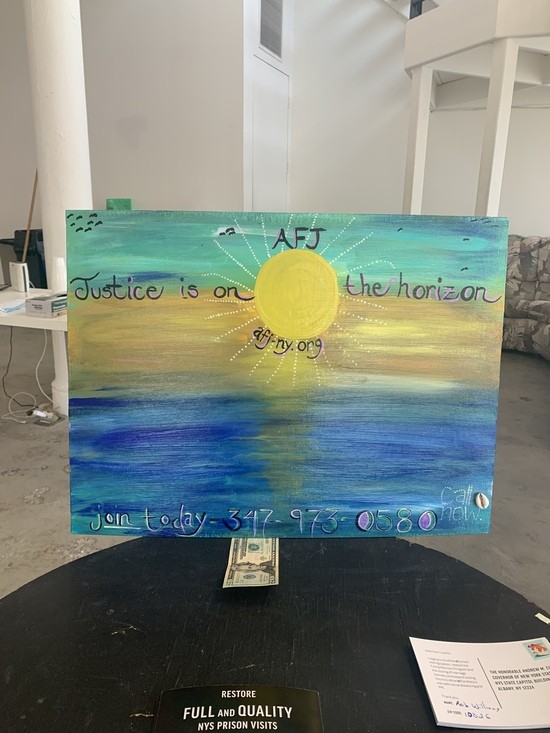 Watercolor painting on canvas by Mesha, a member of Alliance of Families for Justice. (Photo Credit: Tamar Sarai Davis)

While AFJ is holding off on setting a date for the next in-person protest due to the dropping temperatures, Mesha, a member for the past four years, hopes that one of the pieces she created today-- a watercolor painting of a sun setting over blue waters with the slogan “justice is on the horizon”-- will be turned into a banner to use at a future rally.

No two stories amongst members of AFJ are the same: Some have loved ones in facilities that allow visits while others don’t, and some are staring down sentences that might stretch into the next decade while others are waiting just a few more months for their loved one to come home. Still, being in community with people who understand some semblance of your experience can be a lifeline. As Luceita described, it “allows us to be free.”

For people with incarcerated loved ones who may not have such a community and may need support, Mesha offered a key piece of advice: “Just stay as fully connected with your loved ones as much as you can to feel that this bond is still there,” Mesha said. “This time can make the bond stronger.”

Until recently, Mesha’s husband used a tablet to send her emails, but recently it broke and he became very frustrated, she shared. In response, she told him that the two had to “make it work,” and turned to other forms of communication like phone calls and handwritten letters.

Takeasha echoed Mesha’s advice and encouraged people to also be understanding and patient with their loved ones inside even as the demands of their own personal lives continue to press on.

“Understanding their position and not taking things personally will go a long way,” said Takeasha. “You can’t imagine what your loved one is going through.”

Her message is equally applicable to the broader public at this time of year, which must show greater understanding both for incarcerated people and those who love them.

Tamar Sarai Davis is the criminal justice staff reporter at Prism. Follow her on Twitter @bytamarsarai.
Give today and support BIPOC-led journalism!