When 27-year-old Walter Wallace Jr. was shot and killed by Philadelphia police in late October, hundreds of protestors took to the streets to demand justice. In response to the protests, Haverford College President Wendy Raymond and Dean Joyce Bylander sent out an email discouraging students from protesting and implying that protestors were causing “harm and havoc.” 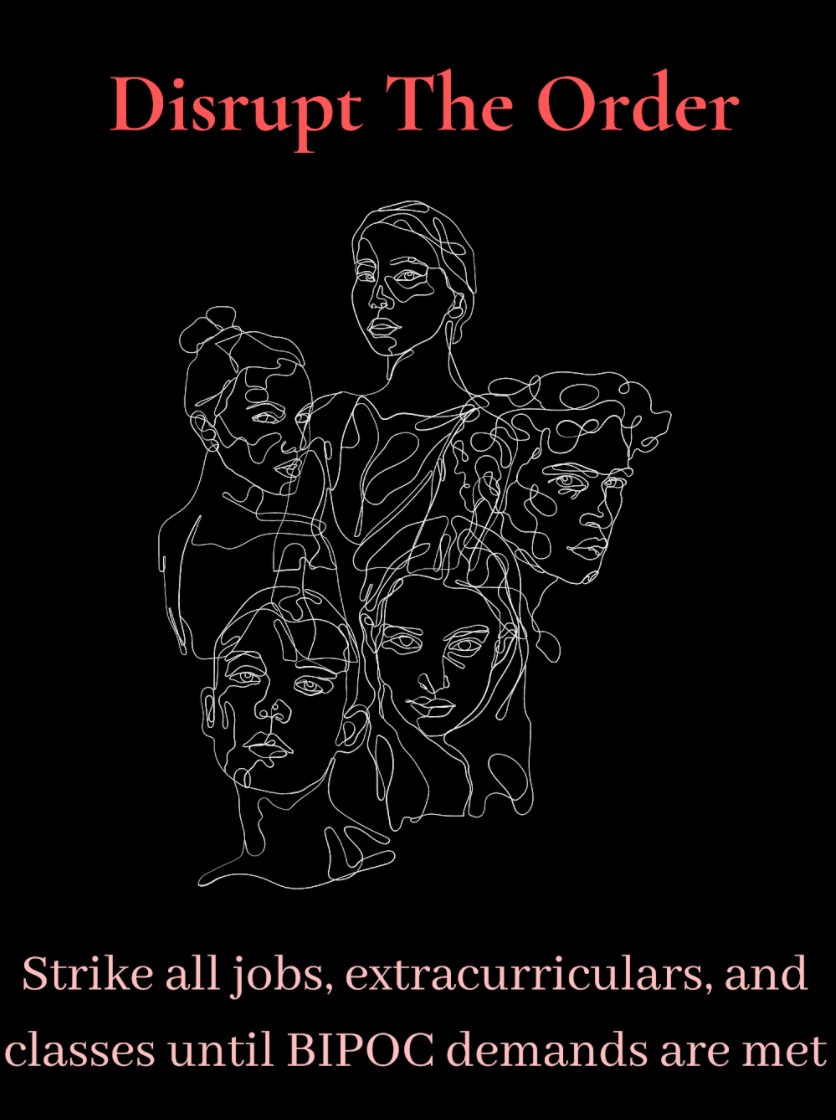 After the email was sent, Haverford students quickly organized a campus-wide protest to address the administration’s position on Wallace and the college’s history of institutional racism. Both Raymond and Bylander attended the protest and were asked to speak. Bylander, who is a Black woman, addressed the crowd by saying, “There are people who don’t care at all about Black lives ... I fear that there are people who will seize this moment for evil.”

Prism reached out to Raymond’s office to request an interview. The office declined the request on Dec. 10.

The protest was followed by a 14-day strike of all activities affiliated with the college, including classes, club meetings, athletic practices, and on-campus jobs. Student organizers announced that the strike would continue until their demands were met, which included the removal of Raymond as chief of diversity, equity, and inclusion, and the termination of the college’s relationship with the Philadelphia Police Department.

Inspired by Haverford, Bryn Mawr and Swarthmore (part of the tri-college consortium in Pennsylvania) joined the strike in solidarity and eventually wrote their own demands. Although the schools had similar motivations to strike, the outcomes and administrative responses were vastly different.

With half of the student body off campus due to the COVID-19 pandemic, Haverford students relied on social media platforms to organize. Using the hashtags #DisruptHC and #DisruptHaverford, student organizers shared their message on their Instagram page: “this strike is about sacrificing what’s normal and disrupting what’s comfortable—because now is the time to show up for black lives on this campus.”

Haverford senior Camille Samuels explained that while core organizers met with administrators, the remainder of students supporting the strike attended teach-ins on Zoom. “We decided to take the angle of, you know, a strike isn't a break. It's not a time to stop learning” Samuels said. Some of their teach-ins included Asian Narratives in the Context of BLM and Utopian Futures: Autonomous Zones, World-systems and Transnational Solidarity.

Out of the approximate 1,300 enrolled students, 800 signed the document in support of the strike and demands. When asked about faculty participation, senior Lourdes Taylor said they received pushback from professors, especially those in STEM departments.

The strike organizers and the Haverford administration had dozens of meetings and email exchanges negotiating demands. On day 13, organizers announced that the strike was going to end the following day. All but two of their demands were addressed by the administration: support of student participation in direct action and police abolition.

On Nov. 11, the organizers celebrated their achievements, which included securing $75,000 towards renovations for the Black Cultural Center, $75,000 for bias training over the next two years, and committing the college to articulating admission priority for Indigenous students.

Bryn Mawr students started striking in solidarity with Haverford and officially started their own strike on Nov. 3. Their demands included the implementation of a reparations fund for Black and Indigenous students, the removal of names and monuments present on campus dedicated to individuals with a history of oppression, and the declaration of Bryn Mawr as a sanctuary campus. Initially, students were hesitant to participate.

“People didn't really want to sacrifice their grades and their GPA for a strike,” one Bryn Mawr first-year student told Prism. The student has asked to remain anonymous. The same hesitation was common among some faculty members. “There have been faculty who have retaliated in ways of rescinding recommendation letters or have made it very difficult for people to strike by not taking out any assignments,” she said.

On Nov. 13, during a town hall including students and administrators, President Kim Cassidy, Dean Jennifer Walters, and Provost Tim Harte were asked if they would resign if the demands were not met—the three of them said yes. On Nov. 16, Cassidy emailed the community supporting the students' demands and committing herself to work alongside the students to make sure they were implemented.

Student organizers ended the strike on Nov. 19. Some of their demands were fully met with budgets and timelines, while others went to committees to be further discussed. Some of the achievements included creating a new employment position to address the needs of DACAmented and undocumented students, removing the M. Carey Thomas bust and portrait from Old Library, and hiring transformative justice experts to discuss the college’s relationship with law enforcement.

Like Bryn Mawr, Swarthmore students wrote their own demands, which included mandatory workshops on intersectionality, reduction of the public safety officer workforce, and the establishment of a Black Studies department major with a Black department chair. They started striking on Nov. 16. However, Swarthmore organizers had a drastically different experience than the neighboring schools.

Swarthmore organizers made the choice to remain anonymous throughout the strike. Prism spoke with three of them, who explained that the decision to remain anonymous came after they learned the college’s history of surveillance and targeting of students who organized, particularly Black students.

Although approximately 500 out of 1,500 enrolled students signed the letter supporting the strike, organizers received tremendous amounts of pushback from both students and faculty. One student organizer said, “Faculty were very upset that we didn't reach out to them before striking. They wished we had come to talk to them so that we wouldn't have to strike.” Another student added, “We got a lot of pushback from first-years. I guess they didn't really understand how Swarthmore has been historically harmful, even though we had an institutional memory team.”

The organizers held multiple office hours sessions over Zoom and welcomed faculty, staff, and alumni to drop in, discuss the strike, and ask questions. Those who joined rarely discussed the actual demands. One student said, “There was a lot of anti-Black speech in terms of, you know, tone policing the organizers.”

Swarthmore President Valerie Smith expressed skepticism about the organizers’ anonymity and declined their invitation to a public town hall meeting designed to discuss the demands. In an email to the community, she stated, “At this point, it would be disingenuous of me to suggest that I see further engagement with an anonymous group and a set of demands that do not reflect the serious and ongoing efforts of those in our community as the most effective way of addressing issues critical to the entire College community.”

A student said, “I don't even know if they read all of the demands, if they even took it seriously.” Another student said, “I'm very scared of this administration. We just want to be as safe as possible, but still advocate for the people that are being hurt by our institution.”

Haverford and Bryn Mawr student organizers accomplished a significant amount during their strikes. Haverford senior Lourdes Taylor said, “I think we need a little bit of time to recuperate and to figure out what we're doing. [I envision] a bigger organizing structure between the three colleges to really cut ties with the police departments in our area and with prison labor.”

The Bryn Mawr first-year student said, “The work does not end here ... the fight against racism is not just a three-week strike, it’s a lifetime of advocacy.”

The future of Swarthmore is unclear. While the student organizers have started a conversation about institutional racism, they are still waiting for the administration to at least begin addressing structural changes.

Donate Now →
Nebraska activists want undocumented essential workers prioritized for COVID-19 vaccination
María Inés Taracena
Loved Amanda Gorman’s inaugural poem? Support more emerging Black poets and writers
Saba Keramati
Black women don’t need praise. We need leaders to take action.
Toni Wilson
How the anti-abortion movement fed the Capitol insurrection
Tina Vásquez
The child welfare system is another form of discriminatory policing
Elizabeth Brico
Follow us on social for stories the mainstream media isn’t covering.
BIPOC-led journalism like ours has never mattered more. Give today to double the impact of your donation.
Donate Now →
Women and the Death Penalty
Since the death penalty was reinstated in 1976, 16 women have been executed in the U.S.
Election 2020: What’s at Stake
This election represents a chance for significant change on the major social justice issues of our time. Dive in to get...
Tribal Nations, Voting Rights, and Political Power
Ahead of the critical 2020 election, this series explores the current landscape of voting rights and the challenges Nati...
Stories that challenge the status quo — right in your inbox.