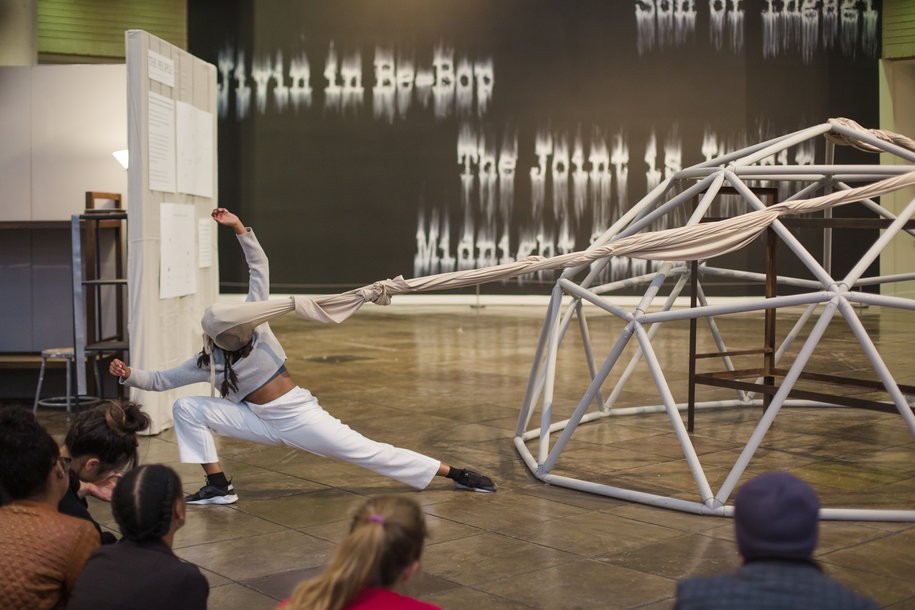 Next week, two Los Angeles artists who have spent years advocating for change in the city’s prison and jail systems will witness a culmination of their work. On Tuesday, L.A. County residents will vote on Measure R, the Civilian Police Oversight Commission and Jail Plan Initiative, which will give the Sheriff Civilian Oversight Commission the power to investigate misconduct complaints by subpoenaing records and witnesses, and also require the panel to propose a plan to reduce the county’s jail population.

Through their work with Reform L.A. Jails, Damon Turner, a hip-hop artist, and Brianna Mims, a dancer, have galvanized the power of art to ignite change. Along with a cadre of artists, the pair helped Reform L.A. Jails gather almost a quarter-million signatures to put Measure R on the ballot. Now they’re educating the county’s 10 million residents about the movement to reform the county’s jails and the sheriff’s department that oversees them.

The movement to reform the L.A. jail system

Turner believes that activism and engagement with policy aren’t limited to a select few. “It's not the responsibility solely on the people who are directly impacted by the prison system to change it,” he argued. “It is also folks who are not directly impacted but who have affluence, who have relationships, who have a vote—to also [get] involved and [change] it.”

That’s why he, Mims, and others are working to increase awareness about the measure and its intended impact. If approved, Measure R would “reduce recidivism, prevent crime, and permanently reduce the population of people cycling in and out of jail that are experiencing mental health, drug dependency, or chronic homelessness issues,” according to the Reform L.A. Jails website.

Reform L.A. Jails was created by JusticeLA, an umbrella organization co-led by Patrisse Cullors, co-founder of the Black Lives Matter movement. The measure is supported by more than 100 community organizations, including the American Civil Liberties Union of Southern California, Dignity and Power Now, United Teachers of Los Angeles, and the Los Angeles County Democratic Party.

Movement in the movement

Mims sees her art as cultural work designed to challenge the way we think.

“How do we shift culture?” 22-year-old Mims asked. “’Cause we have like this inherent notion [about the link] between crime and punishment.”

Her goal is for L.A. County’s leaders to reimagine how they see and treat those who have committed crimes. Another goal is to connect her dance practice to advocacy and explore how physical movement, or the lack thereof, affects incarcerated bodies. While a student at the University of Southern California, Mims joined JusticeLA as it launched its jail bed drop project, which stationed 100 jail beds in front of the Los Angeles County Board of Supervisors office in September 2017. Designed to spark a conversation about jail reform, the beds represented the thousands of incarcerated women and men who are separated from their families and human touch. For her senior thesis, Mims expanded the project with other artists to include integrated movement, spoken word, and personal artifacts from people formerly incarcerated. As part of the project, Mims danced with a 15-foot headpiece attached to a bed in what she describes as a commentary on recidivism.

“You’re always attached to the system, even though you’re not technically a part of it anymore,” she said.

This activism felt natural for her. Her great-grandparents who lived in Savannah, Georgia, were very active during the civil rights movement.

“My great-grandpa was one of the petitioners for Brown v. Board of Education,” Mims said proudly. “They worked with the NAACP closely.”

So, when she arrived at USC as a dance major, she explored how dance could create social change. She taught a movement class to incarcerated women through the University of Southern California Prison Education Project coordinated by Nicholas De Dominic, assistant professor of writing at USC.

“Imagine how sort of deeply spiritually damning [incarceration] is—people telling you what to do and when to do it and how to do it—and then to walk into a room with Brianna who has this kind of wonderful persona in the classroom—and then to be able to be free for an hour,” De Dominic said. “I think that's quite beautiful.”

Since her college graduation, Mims and her team have shared the project throughout the city, instigating conversations around reforming jails and pushing for the passage of Measure R.

Music in the movement

Like Mims, Turner seeks to shift the culture. The 33-year-old defines himself as a “cultural architect” more than a hip-hop artist. He is the founder and CEO of Trap Heals, a cultural architecture firm that funds cultural creatives who typically don’t receive the appropriate level of recognition or funding for their art.

Turner launched Trap Heals in 2018 with Dyane Pascall, who works as the company’s CFO. Trap Heals runs the Reform L.A. Jails day parties, which have initiated conversations around jail reform and mental health awareness while providing communities with good food and music.

Turner’s goals are simple: “talking about mental health in a way that's not taboo,” and seeing L.A. County divert the $3.5 billion it had earmarked to spend on new jails toward social services, especially mental health services, instead.

For Mental Health Awareness Month in May of last year, the firm partnered with the Reform L.A. Jails campaign to produce a mental health day party in Compton. In January, the company partnered with Represent Justice, a national criminal justice reform coalition, to create Proximity Greenhouse, an art installation in concert with the film Just Mercy. Turner hired local artists, including some who were formerly incarcerated, to create the art piece “designed to normalize conversations around incarceration and humanize those who were incarcerated,” Turner said.

Pascall says Turner’s passion to curate transformative events for the community is what sets him apart.

“In the world of f***ing sharks, Damon has a huge heart and is willing to risk his neck for people that were otherwise thrown away. He's sticking up for them and giving them a shot at whatever they're good at. He is investing in his people,” Pascall said.

The future of the movement

Regardless of what voters decide on March 3, Mims and Turner say they will continue to campaign for reform and use their art to bring peace to the city. They and the artists they partner with are convinced that what the world (and Los Angeles in particular) needs is less crime, less punishment, and more peace.

Chanté Griffin is a writer and natural hair advocate based in Los Angeles. Her socially conscious work centers the intersection of race, faith, and culture. She’s a contributing writer for The Root, The Lily, and Faithfully Magazine; and her articles, essays, and interviews have appeared in publications including The Washington Post, The Huffington Post, Ebony, NewsOne, The Los Angeles Times, LA Weekly, TV Guide, and PBS SoCal. Chanté is a VONA Voices alum and a 2019 ARC (Arts Religion Culture) Emerging Leader Fellow. In her free time, she enjoys creating comedic content about her natural hair journey for The Gram @kinky_coily_comedy and living her best Black life.

Read more of Prism’s series on the movement to reform Los Angeles County jails here, and follow us on Twitter @ourprisms and on Facebook for more reporting on criminal justice and grassroots work toward reform. Prism is a nonprofit affiliate of Daily Kos. Our mission is to make visible the people, places, and issues currently underrepresented in our democracy. By amplifying the voices and leadership of people closest to the problems, Prism tells the stories no one else is telling.