In a letter written last month by Cameroonian asylum-seekers just one day before they protested the conditions in which they were being held at a Texas detention center, the women alleged that they were being forced to sign their own deportation orders and that they were experiencing medical neglect and discrimination. Entitled “A cry for help,” the letter is dated Feb. 23, and the women who authored it identify themselves as “Southern Cameroon Refugees.” They report that some of them have been detained for as long as seven months and have been denied both parole and bond.

“Some of our sisters have gone through the court proceedings … and have been failed, despite all that is happening in our country,” they wrote. “Some of us, even after appealing, are being forced to sign deportation and parole denial letters against our will.”

As Prism previously reported, more than 40 Cameroonian women—all of them asylum-seekers—were transferred by Immigration and Customs Enforcement (ICE) after a Feb. 24 protest against the conditions they were facing inside the T. Don Hutto Residential Center in Taylor, Texas, a detention center dogged by allegations of human rights abuses, including medical neglect. The facility detains roughly 500 asylum-seeking women, and the Cameroonian women who wrote the letter report that there are “about 300” African women currently detained at the facility. They estimate that more than 200 of those women are from Cameroon, a population they say is “increasing on a daily [basis].”

Based on data from the United Nations High Commissioner for Refugees, there was a 56% increase in the number of people from Cameroon seeking asylum in the U.S. between 2014 and 2016. Since 2016, around 10,000 Cameroonians have fled their country and sought asylum in the U.S., as the northwest and southwest regions of Cameroon have been in turmoil since the U.S.-backed Francophone government violently “suppressed a series of peaceful protests against the marginalization of the English-speaking minority—about 20% of the overall population,” the website Pacific Standard reported. This crackdown resulted in an armed conflict with separatist groups, displacing at least half a million people and causing thousands in the English-speaking minority who are facing government oppression to seek refuge elsewhere. 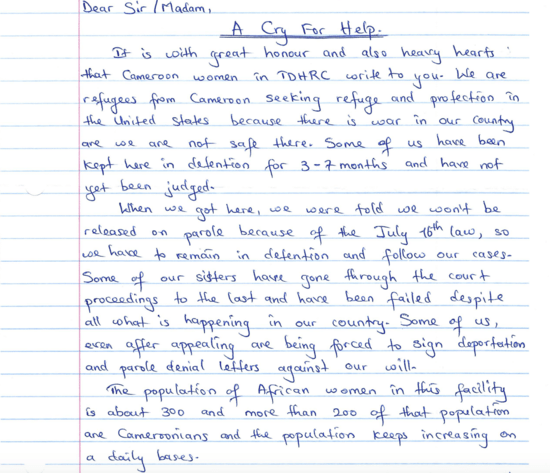 An excerpt from the letter sent by the Cameroonian women who protested at the T. Don Hutto Residential Center in Texas.

It is unclear whether the women who wrote the letter are even detained at Hutto anymore. ICE confirmed to Prismlast week that after approximately 80 detained women participated in the protest at Hutto, 47 of them were transferred to the Laredo Detention Center because of their refusal to “comply with requests to discontinue blocking critical pathways” at the facility. One of the most serious allegations made in the letter is that the detained women are experiencing medical neglect. “Some of our sisters are sick and not being well treated. One person is [in] a wheelchair who needs surgery and many others with serious health conditions who also need surgery but are being neglected,” the letter states.

The women who wrote the letter also allege that medical staff at Hutto accuse them of “pretending” when they are in serious pain and “laugh and mock” their medical conditions, while sometimes giving detained patients “wrong medication.”

Nana Gyamfi, the executive director of the Black Alliance for Just Immigration (BAJI), said that the reports emerging from Hutto “amount to more than medical neglect.” “These guards are intentionally refusing to attend to the medical needs of these women as a form of further torture and retaliation for standing up for their human rights and dignity,” Gyamfi said. “My concern is that the retaliation will increase and women will die.”

The Cameroonian asylum-seekers detained at Hutto also report that the money they have in their accounts is being “drained” by “outrageously high commissary prices,” the profits of which, they were allegedly told by immigration officials, would go toward “recreational activities and maintenance in the facility.”

In a statement to Prism, ICE said the allegation that the agency is forcing detained women to sign their deportation or parole denial letters is “baseless and without merit.” The agency also said it could not respond to allegations of medical neglect without the specific names and alien numbers of detained women, but even with that information, the agency is not legally permitted to release medical information on specific detained people without a signed privacy waiver. Lastly, ICE said, CoreCivic, the private company that runs Hutto, contracts with a third-party vendor to run its commissaries, so the agency would not comment on allegations regarding the price of commissary items.

None of the accusations made by the Cameroonian women detained at Hutto are new, and the detention center is not a stranger to protests. In 2015, at least 27 immigrant women from Brazil, El Salvador, various European countries, Guatemala, Honduras, Mexico, and Nicaragua launched a hunger strike to protest “stays of more than one year, denied opportunities to post bond, inordinately high commissary prices, poor medical treatment, and overall neglect,” the website Colorlines reported.

Anti-Blackness is also playing a role in the treatment of the Cameroonian asylum-seekers at Hutto, according to advocates and the women detained at the Texas detention center. The women allege that they are being treated unfairly and say that African women in particular are facing a lot of discrimination. Gyamfi said that the Black migrant communities BAJI works with repeatedly state that they are discriminated against in the immigration system because of their race.

When asked if Cameroonian asylum-seekers were being discriminated against at Hutto, ICE said it provides a “safe, respectful, and secure environment for all detainees, regardless of race, gender, sexual orientation, national origin, color, age, political affiliation, ethnicity, religion, or disability.”

The federal immigration agency is still not commenting on why it transferred 47 of the women who protested to the Laredo Detention Center, more than 200 miles away. It is unclear whether it is a form of punishment used by the agency, but advocates assert it was done in retaliation.

Deborah Alemu, a Texas-based organizer who works with Black-led immigrants’ rights organizations, told Prism that women transferred out of Hutto have also been traced to three other facilities: the Adams County Correctional Center in Mississippi, and the Jackson Parish Correctional Center and South Louisiana Correctional Center, both in Louisiana. Alemu’s fear, she said, is that ICE has taken the asylum-seekers away from their attorneys and moved them to more “remote and hostile detention centers.”

"Every time people are transferred, they are forced to relearn the particularities of the new detention center, their support system has to find them and add money into their commissary [and] phone accounts, and establish how to send and receive calls or mail, as every jail is different,” Alemu said, noting that when detained people are transferred from one facility to another, they are often woken up at 2 or 3 AM, “shuffled into vans,” and driven for hours without rest, food, or water, often while shackled.

“[T]hey continue to embody resistance and resilience in the most courageous ways, even in captivity,” Gyamfi said. “All who believe in freedom should uplift their experience and push for their immediate release.”

Tina Vasquez is the senior reporter at Prism. She covers gender justice, workers' rights, and immigration. Follow her on Twitter @TheTinaVasquez.
Give today to double the impact of your donation!

From now through December 31, we’re participating in NewsMatch—a national matching-gift campaign that will match every new monthly donation to Prism 12x, and double any one-time donation up to $5,000.

Donate Now →
How Los Angeles base builders plan to halt Mayor Eric Garcetti’s race to the White House
Lisa Kwon
This election, young voters believed in more
Kimberly Inez McGuire
Lyft drivers issue a warning in the wake of California’s Prop. 22
María Inés Taracena
Women of color delivered Biden his victory. Now he needs to deliver for them.
Alejandra Y. Castillo
Detained and quarantined: 28 asylum-seeking children face deportation and COVID-19
Tina Vasquez
Follow us on social for stories the mainstream media isn’t covering.
BIPOC-led journalism like ours has never mattered more. Give today to double the impact of your donation.
Donate Now →
Election 2020: What’s at Stake
This election represents a chance for significant change on the major social justice issues of our time. Dive in to get...
Tribal Nations, Voting Rights, and Political Power
Ahead of the critical 2020 election, this series explores the current landscape of voting rights and the challenges Nati...
Sex Positivity and the Arts
Prism's new culture series hightlights sex positivity from the perspective of BIPOC communities
Stories that challenge the status quo — right in your inbox.