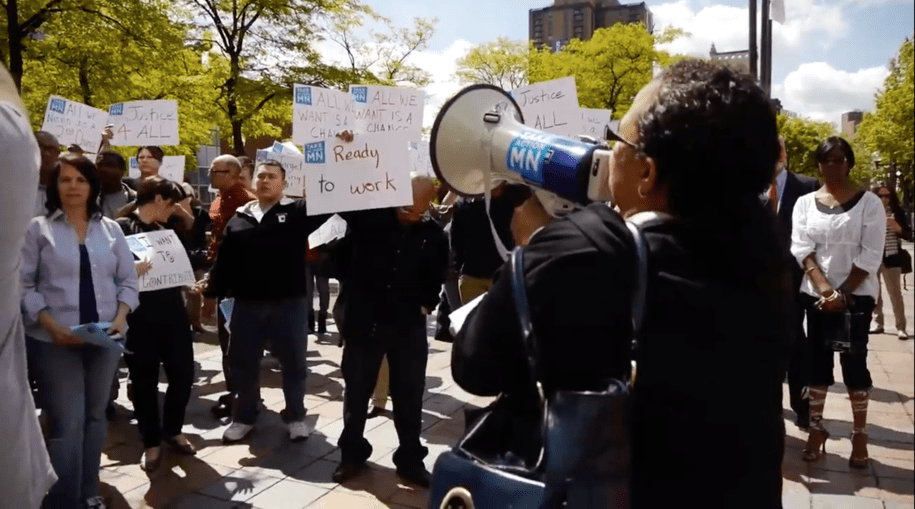 With the coronavirus epidemic upending politics as we know it, organizations around the country are shifting the way they engage with communities, elected officials, and the political system as whole. One such group is TakeAction Minnesota, a statewide “multi-racial people’s organization building power for a government and economy that works for [everyone].” Like many other states, Minnesota is currently in a state of flux due to the COVID-19 pandemic as elected officials grapple with how to respond, so far having closed public beaches and pools and shifted public school online for the remainder of the school year.  TakeAction Minnesota is also responding to the crisis.

Led by Executive Director Elianne Farhat, TakeAction Minnesota’s core work is divided into four buckets: movement politics, organizing, public affairs, and fiscal sponsorship, “provid[ing] capacity for powerful organizations to launch and grow.” The organization has described the current moment as an opportunity “to fundamentally re-write the rules, recognizing that when we center those of us most impacted by inequities, it makes us all stronger.”

On March 20, in collaboration with partner organizations, TakeAction Minnesota launched a “People Centered Response to COVID-19,” which laid out an inclusive framework for responding to the pandemic that focused on the needs of those affected. The People Centered Response has eight policy demands: emergency assistance for all, safety in our workplaces, health care access for all, food system security, housing stability, affording our lives, supporting small businesses, and justice reform. TakeAction also joined a national collective to demand a just stimulus package from Congress, including expansion of unemployment and social security benefits, and paid sick leave for all.

Talking with Prism, Farhat explained that the response to the current crisis was grounded in the organization’s longstanding values of interconnectedness, care, and solidarity, and focused on the communities TakeAction Minnesota represents.

“The way we and our partners have responded to this moment is grounded in our values, and anchored in the stories and the experiences of our people,” Farhat told Prism. “What that means for us is that as we figure out how to take action in this moment, [we’ve been] talking to our people, hearing how they're being impacted, and making sure that the experiences our folks are having in their workplaces, in the health care system, in their family farms, in our schools, in our community, are being elevated to policymakers [and] crafted into policy demands, and are being moved forward with the people power that we've been building.”

Since its founding in 2006, TakeAction Minnesota has taken an intentional approach to building power and facilitating multiracial, multigender, and multigenerational conversations to guide how their work will proceed. Bahieh Hartshorn serves as the organization’s movement politics manager, tasked with “co-creating and building the movement governing infrastructure that shifts decision making power into the hands of Minnesotans, especially marginalized Minnesotans—at every level of government.” Speaking with Prism, Hartshorn reflected on TakeAction Minnesota’s capacity building across movements.

“We know the current political system is not working for us,” said Hartshorn. “What we're really building is independent political power that will lead to governing power grounded in our values.”

Building independent political power and movement governance requires “building deep relationships with already [elected] progressive people and doing a lot of agenda setting, instead of [an] adversarial relationship with electeds,” she said. A part of that strategy, she explained, calls for getting people from the movement elected to public office.

Stressing the need for transformational conversations grounded in shared values and experiences in organizing both urban and rural areas in Minnesota, Hartshorn cited the member organization The Land Stewardship Project as an example. The project was “founded in 1982 to foster an ethic of stewardship for farmland, to promote sustainable agriculture, and to develop healthy communities,” according to the website. A March 17 blog entry from the Project argued that given the “uncertain times brought on by the coronavirus pandemic, buying a share in a Community Supported Agriculture (CSA) farm makes more sense than ever.” Hartshorn explained that The Land Stewardship Project “has gotten really clear about what it means to organize a base of farmers around this vision of dismantling corporate power.”

These are the deep conversations happening across the state, and the entire midwest, as communities grapple not only with the coronavirus pandemic but with things like the farm crisis and the challenges being posed by capitalism. TakeAction Minnesota and Hartshorn engage in conversations with communities and partner organizations to develop a shared vision of the things they want to change rather than simply accepting the way things have been.

In addition, TakeAction Minnesota has made space for the public to share their stories and experiences, highlighting the importance of shared narratives and storytelling from those closest to a given issue.

“Folks want to be seen, and really welcome invitations to share their story and their family's story. And the thing about this moment of crisis is that for many of our people, the people our partners work with, our lives have been a lot of crises,” said Farhat. “We know what it means and looks like to relate to people with love, generosity, and care, as we move through tough times. And in this moment, folks are particularly hungry for connection and are particularly hungry to act together powerfully and in solidarity and to have a path forward.”

Sharing our stories and shifting narratives is important in a time where many of those elected to represent the public make decisions that are in conflict with the public’s collective well-being. In the midst of crisis and disarray, there is a lot of opportunity for new voices and perspectives to take the helm.

“It's the moment to not be afraid to move our agenda forward or being told that we shouldn't be operating in a powerful and political way,” says Farhat. “But in fact, everything is politics, and in order to build the world that our people deserve, our role as moving organizations, as people's organizations, is to build and is to bring more people into our political home and to be ready on the other side of this to move a powerful agenda forward.”

Prism is a nonprofit affiliate of Daily Kos. Our mission is to make visible the people, places, and issues currently underrepresented in our democracy. By amplifying the voices and leadership of people closest to the problems, Prism tells the stories no one else is telling. Follow us on Twitter @ourprisms and on Facebook.