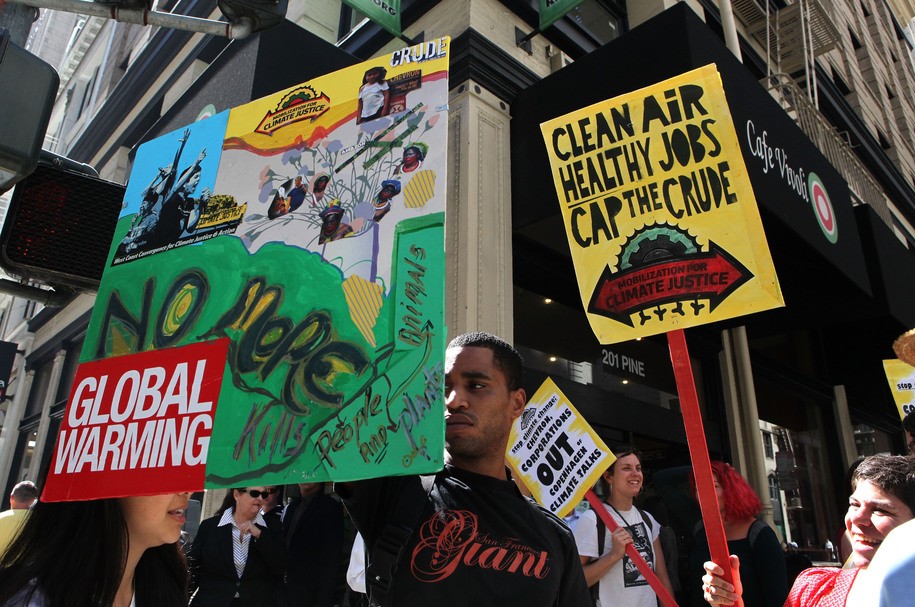 The COVID-19 pandemic has left its permanent imprint on society in just a few short months and cost thousands of lives needlessly due to government inaction and negligence, ineptitude, and malice. The virus has laid bare the longstanding inequities and injustices of American society and forced the nation to confront an ongoing emergency plaguing the poor, people of color, and Indigenous communities.

The coronavirus has shone a spotlight on an economic system lacking robustness, and a political system designed to meet the needs of the powerful. A devastating, protracted, and yet manageable crisis with the proper planning, political will, and allocation of resources, the coronavirus has much in common with the specter of climate change. The former is a turbocharged version of the latter, and a preview of what will become of vulnerable, at-risk, and disenfranchised populations as the U.S. responds to natural disasters.

Climate change and pandemics are inextricably linked. The ravages of climate change will result in more pandemics, and both will take more of a toll on communities of color and the poor. Rising temperatures are impacting the migration patterns of disease-carrying animals. As human beings continue their incursion into the natural world—deforestation, extracting natural resources, disrupting wildlife, and dislocating communities for the sake of commercial development and corporate profiteering—we will unleash more microorganisms and create more plagues. And air pollution, which disproportionately affects low-income and Black and Brown communities and compromises the respiratory systems of those who are exposed, increases their risk of death from COVID-19.

While coronavirus has led to lower short-term carbon emissions, it has not eliminated climate change. That would require net-zero emissions. Therefore, we should expect more extreme weather, including floods, wildfires, hurricanes, heat waves, and drought, which exacerbate present-day inequities, and impose a burden on the poor, who are already stretched thin and impede their ability to recover.

People of color live at the front lines of two crises, and both crises require a wartime mobilization against the poverty and disruption they create—and illuminate. It is no accident that the disproportionate victims of the coronavirus pandemic and climate change are Black, Latinx, Native American, and Pacific Islanders, those who are among the most vulnerable in America and most susceptible to injustice and systemic inequities in society. The emergency and essential workers, the “heroes” who are forced to work like hostages in unsafe conditions without protective equipment; the immigrant workers toiling in the meat processing plants; the store clerks, sanitation workers, bus drivers, delivery gig folks and others who cannot work remotely are in harm’s way. Following the cues of their white nationalist leader in the White House, reactionary state governors would throw Black and brown communities to the wolves—or to the “rona”—and get people back to work to save their economies for capitalism.

We are not in this together. According to a report from Oxfam, the pandemic will push over half a billion people into poverty worldwide, in a global economy where the wealthiest 1% control more economic resources than the bottom 4.6 billion people. The Oxfam report follows an equally disturbing warning from the UN that climate change will usher in an era of “climate apartheid” that could throw 120 million more people in poverty by 2030.

“Perversely, while people in poverty are responsible for just a fraction of global emissions, they will bear the brunt of climate change, and have the least capacity to protect themselves,” said Philip Alston, UN special rapporteur on extreme poverty and human rights. “We risk a ‘climate apartheid’ scenario where the wealthy pay to escape overheating, hunger, and conflict while the rest of the world is left to suffer.”

Climate change threatens economic disaster with widespread hunger and displacement, but also human rights catastrophe and a threat to democracy and civil and political rights. From the Amazon to the Congo, and from the Solomon Islands to the Gullah Geechee Sea Islands, people are vulnerable.

In the U.S., political leadership has demonstrated its willingness to sacrifice thousands of Black and brown victims of climate change, including the nearly 2,000 who died in New Orleans when the levees broke from Hurricane Katrina, and the 3,000 Puerto Ricans who perished from Hurricane Maria and received little more than rolls of toilet paper hurled from President Donald Trump for their troubles. Further, the climate refugees from the Global South face criminalization and prison camps when they reach the U.S. border, as their children are kidnaped, caged, and exposed to pandemics.

Just as the death and dislocation brought on by the coronavirus scream for economic and racial justice and an overhaul of our systems and institutions, so too does climate change call for a comprehensive Green New Deal that prioritizes vulnerable communities and connects the dots among economic, environmental, and social stability. The goals of the Green New Deal are “(1) to create millions of good, high-wage jobs in the United States; (2) to provide unprecedented levels of prosperity and economic security for all people of the United States; and (3) to counteract systemic injustices,” while centering the rights and protections of “frontline and vulnerable communities.”

Nothing less than a justice-oriented, holistic approach to climate change and COVID-19 is warranted, lest we find ourselves living under a “new normal” with all the familiar forms of oppression amplified.

David A. Love is a Philadelphia-based writer, commentator, and journalism and media studies professor. He writes for CNN, Al Jazeera, The Appeal, Atlanta Black Star, theGrio, and other publications.