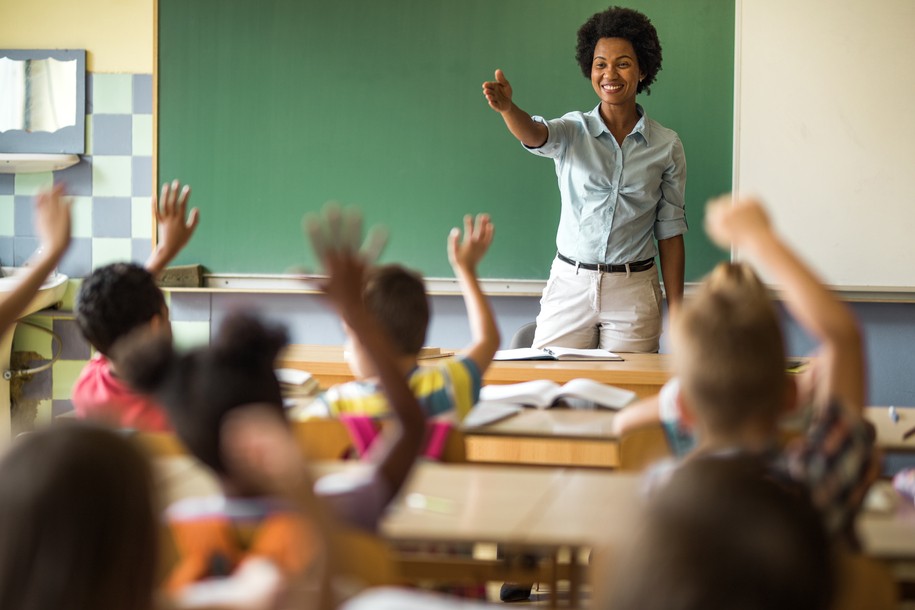 More than 65 years after a landmark Supreme Court ruling integrated schools in the United States, students of color are still facing many of the same issues when it comes to their education. Though the 1954 Brown v. The Board of Education decision marked a special moment for students and educators, it still failed to address how racism harms education for students of color beyond striking down school segregation. After the ruling, many white parents didn’t want their children being taught by a Black educator, resulting in Black teachers and principals being dismissed in large numbers. Schools lost approximately 38,000 Black educators during the transition to integrate schools, and the education system has had a difficult time getting those numbers back to an equitable level.

“Without an effective education, our children’s futures are all but guaranteed to succumb to the imposed conditions of their lineage and location. And even after Brown v. Board, even after decades of school finance litigation meant to equalize the playing field, and even after accounting for wealth disparities, the wrenching reality endures—the United States still invests significantly more money to educate children in white communities,” the report said.

That limited funding has led to teacher and principal retention problems around the country, a lack of teacher diversity, and students getting stuffed into crowded classrooms. The group that gets hit hardest by funding disparities are students of color, who can end up suffering academically as a result.

“To get an education has sort of become a competition,” said Frank Gettridge, executive director for the National Public Education Support Fund. Gettridge has been an educator for more than 25 years and has held positions as both a principal and a teacher in predominantly Black and brown school districts. “I feel education should prepare you for the competition. It should not in itself be a competition. When you have schools with a high minority population, you just don’t have the same access to funding. You have to be very strategic about how you can add to the school.”

The retention problem hits teachers of all ethnicities

Overall, there has been an uptick in the number of teachers of color throughout the U.S., but more of them exit than enter the profession in a given year.

“There are certainly a lot of schools that can’t keep teachers and can’t hire teachers,” said David Kretschmer, a professor of elementary education at California State University Northridge and the former co-director for the Future Minority Male Teachers of California Project. “Those schools have a disproportionate number of teachers that are not fully prepared. Statistically, if a child has three years of bad teaching in a row, that can really impact their educational future because they’re just missing basic skills because they didn’t have a teacher who was actually able to impart those skills and the understanding of those concepts.”

The racial makeup of students has proven to be a deterrent for teachers of all colors. A 2013 study by the National Center for Education Statistics showed that teachers in general prefer to work in school districts with wealthier, white students, and that in “settings with comparable wages, teachers were far more likely to leave their first teaching assignment when they had more students who were Black, had low-test scores, and were eligible for free or reduced-price lunch.”

“Black teachers are more likely to want to stay in underperforming schools. And then once when they make a decision to leave a school, it's oftentimes to leave the profession,”  said Travis Bristol, an assistant professor of education at UC Berkeley. “There is some evidence that white teachers—ones that start in a more challenging school context—stay in the profession, but they move to more high-performing schools and schools serving more white children.”

When it comes to teachers of color, educators say the decision by Black teachers to leave the profession has been largely due to lack of support by leadership, few resources, and the fact that they’re regularly assigned to working with at-risk kids. Students in low-income areas are more likely to have trauma and behavioral issues—issues many teachers aren’t equipped to deal with.

“Black teachers are often called in and put in positions where they need to deal with really, really difficult students,” said Kretschmer. “There’s an idea that they need to go in and turn the students around. That’s a very unfair model to apply to a Black person who’s a teacher in a middle school or a high school or wherever. Right away, they get the crappy jobs.”

Despite those challenges, Black teachers are more likely to choose to work in low-income schools and schools with a predominantly Black student population. Still, learning to navigate those situations often requires a special skill set.

“Teachers are taught in their teacher preparation programs to deliver content, so missing from those schools are services around mental health,” said Bristol. “Those Black teachers are expected to be the teacher and social worker and guidance counselor when they've only been trained around a certain set of skills. Those teachers lack the capacity to handle all of that because that's not how teacher preparation programs were organized.”

Teachers of color tend to leave their post due to poor working conditions and lack of autonomy, and Black teachers in particular have reported that they face discrimination similar to that of their students, often feel invisible, and regularly get passed over for advancement opportunities.

Wages have proven to be another issue. Research shows that teachers in general are more likely to continue teaching when their wages were comparable with the salaries made in other school districts.

It isn’t just teachers who have high turnover rates in Black and brown school districts. Retaining principals has proven to be a struggle as well, and it can have negative consequences on students’ academic achievement. Schools typically see a decline in math and reading scores when principals leave, and when it happens every few years, it can be challenging for students to recalibrate.

“Since principals don’t last very long, by the time they have a plan in place, a new [principal] comes in and has a different plan and has to deal with whatever budget challenges are left,” said Gettridge. “It just becomes a domino effect.”

Federal data shows that principals are overwhelmingly white. But a recent study by researchers at Vanderbilt University showed that having Black principals increases the likelihood of hiring and retaining Black teachers. Black principals also have a positive effect on the test scores of Black students. Studies have shown that most nonwhite principals work in high-poverty schools. White teachers have admitted to feeling underprepared to support Black, Latinx, and low-income students.

“It’s a high stress job,” said Gettridge. During his time as an educator, Gettridge said he experienced the effects of what a lack of resources can have on educators and students. “I actually had a classroom at one point in time with 50 kids,” he said. “Parents used to come in and say, ‘How are you able to control this classroom?’”

When he became principal, Gettridge said he initially experienced a teacher shortage, meaning he had to place students in already-full classrooms. Though Gettridge said he didn’t enjoy putting teachers in the same situation he once had to endure, the limited funding left him no choice. However, throughout his three years as principal, he said parents and teachers became confident in his leadership, even as enrollment increased.

The effect of a diverse teaching staff

Groups around the country have been fighting for more teacher diversity for years. Federal data shows that more than 80% of teachers in the U.S. are white, and fewer than 10% are Black. A 2016 study by the U.S. Department of Education showed that the overall number of teachers of color slightly increased between 1987 and 2012, but the proportion of Black teachers in schools decreased by 1% over that same period.

Evidence shows that Black teachers benefit Black students, and that students of all races prefer teachers of color. Teachers of color account for roughly 20% of teachers, and only 2% are Black men. A 2017 study co-authored by a Johns Hopkins University economist found that having even one Black teacher in an elementary school dramatically increased the likelihood of a low-income Black student graduating from high school. Teachers of color in general also have a better cultural understanding of students of color, which can help them achieve better academic marks.

“We know from research that kids who have teachers of the same color do much better academically,” said Kretschmer. “There are a number of different factors for this. Mainly, it’s the role model factor by saying, ‘I made it in my schooling, and you can too.’ That can have a profound impact on students and make them more willing to remain in school.”

Many of the problems that have resulted in a teacher retention issue in Black and brown school districts can be mitigated with additional funding. Until that happens, however, some people are taking it into their own hands to find a solution. Educators like Kretschmer have proposed incentive pay to keep teachers in school districts with high numbers of at-risk students. The scholarships would be used for teachers  if they “promise to go and teach in high-need schools for anywhere from two to four years,” Kretschmer said.

Some groups have other strategies. In February, a Black caucus of the Denver teachers union convinced members of the school board to make more of an effort to hire and retain Black teachers. Some groups have also formed to address the shortage of teachers in low-income school districts, and help figure out a way to diversify the education workforce.

Despite ongoing efforts to improve teacher retention problems in Black and brown school districts, inequitable funding continues to act as a form of segregation. Brown v. Board was a strong start in improving the level of diversity in schools, but until systemic racial inequality is seriously addressed in the education system, teachers are given more of an incentive to work in low-income school districts, and funding problems are acknowledged thoughtfully and strategically, students of color will continue to be at an academic disadvantage.

Carolyn Copeland is a staff reporter and copy editor at Prism. She covers racial justice and culture. Follow her on Twitter @Carolyn_Copes.
Follow us on social for stories the mainstream media isn’t covering.
Want to support a new type of media outlet? Donate to Prism today. Our 100% women of color-led newsroom challenges toxic media narratives.
Donate Now →
Stories that challenge the status quo - right in your inbox.