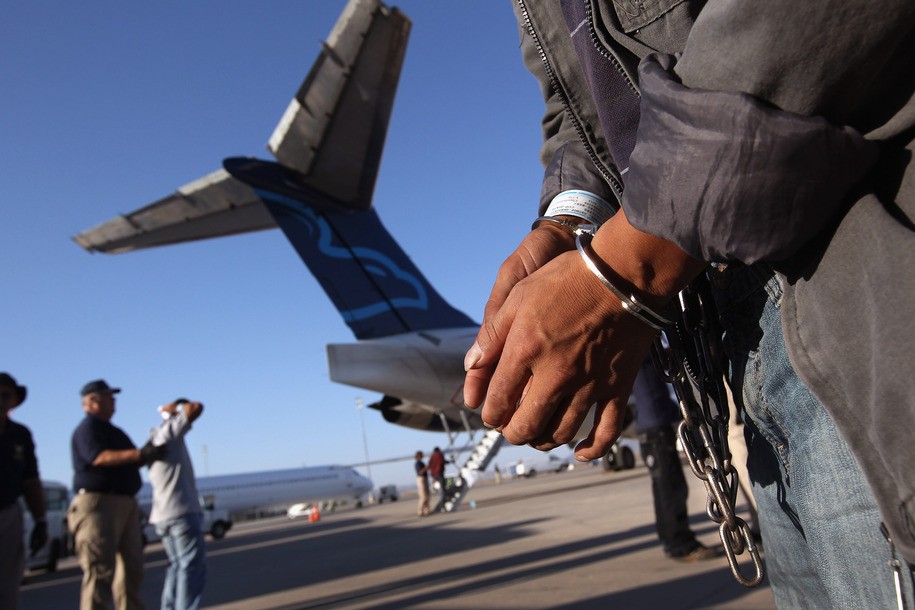 By the time Antonio Arceo answered a call from his wife’s cell phone and heard a stranger’s voice asking if he knew Roxana García, a simple run-in with the police was plunging their family into a nightmare. The stranger was a sheriff’s deputy who had stopped García for speeding, then arrested her for not carrying a license. She spent one night at a county jail about an hour west of Chicago, then federal immigration officers took her. Soon, García would be deported. What began as a run-in with local cops ended in their family’s separation.

Every day, local police are the entry point into the immigration prison and deportation pipeline. For migrants, defunding the police means closing that door.

Since the anti-drug hysteria of the 1980s, criminal policing and immigration law enforcement have grown together. When President Ronald Reagan signed the Anti-Drug Abuse Act of 1988, he described it as “a new sword and shield” in the fight against drugs. That law added the term “aggravated felony” to immigration law. After multiple amendments, these days the Immigration and Customs Enforcement (ICE) agency imprisons and deports migrants convicted of tax fraud, passport forgery, and a host of other offenses. Two years later, President George H.W. Bush signed the Immigration Act of 1990, saying it “meets several objectives of my administration’s war on drugs.”

When Bill Clinton occupied the White House, Democrats pushed their own ideas for policing migrants. In 1994, Clinton signed the Violent Crime Control and Law Enforcement Act. The law dedicated more than $8 billion for state prison construction. It also made it easier for state and local governments to jail migrants by agreeing that the federal government would pay part of the cost. Decades later, Clinton said the 1994 bill made the problem of incarceration “worse.” But Joe Biden, who as a senator helped shepherd the proposal through Congress, continues to stand by the bill, calling it the “1994 Biden Crime Bill.” Clinton also approved a law creating formal partnerships, called 287(g) agreements, between immigration officers and local law enforcement agencies. With a modicum of training on immigration law, these contracts let local cops act like ICE agents. Today there are 146 287(g) agreements letting sheriff’s deputies and city police operate as federal immigration officers.

The next two administrations continued the bipartisan trend of entangling local cops and immigration agents. Under President George W. Bush, ICE launched Secure Communities, a program that lets immigration authorities scour police databases searching for people who might be deportable. Under President Barack Obama, Secure Communities spread nationwide. In 2009, Janet Napolitano, Obama’s head of homeland security, called it an important “force multiplier.” After word got out that sympathetic people like García were being caught in its crosshairs, the Department of Homeland Security ended it in November 2014. A week into his White House stint, President Donald Trump relaunched Secure Communities. Since then, one-third of deportations resulted from Secure Communities.

As with traditional policing, immigration policing hits Black migrants especially hard. The Black migrant population in the United States has grown in recent years, now numbering over 4 million, with Jamaicans and Haitians leading the way. Almost one in 10 Black people in the United States in 2015 was born outside the country. Like police, immigration authorities regularly rain nightmares onto Black communities. Immigration judges, for example, are substantially less likely to release Jamaicans from ICE prisons while their cases are pending. Government data shows that 46% of all migrants received a bond in 2020, but only 31% of Jamaicans were so fortunate. And just as Black people are disproportionately likely to be imprisoned for a crime, Black migrants are more likely than others to be deported due to a criminal conviction.

The intimate relationship that immigration officers enjoy with local police is their weakness. Defunding police would mean limiting their reach. Without local police officers to act as their sentinels, ICE would have fewer eyes and ears searching for people to deport and lives to upend.  Without the help of local cops, federal immigration agents would find that filling prison cells and deportation flights would become much harder.

"César Cuauhtémoc García Hernández is the author of Migrating to Prison: America’s Obsession with Locking Up Immigrants" and a professor of law at the University of Denver.
Follow us on social for stories the mainstream media isn’t covering.
Want to support a new type of media outlet? Donate to Prism today. Our 100% women of color-led newsroom challenges toxic media narratives.
Donate Now →
Stories that challenge the status quo - right in your inbox.