Major media outlets are finally tackling some worst-case scenarios for an election meltdown—from problems with voting to the threat of a contested election.

But while organizations like the American Press Institute and ProPublica have offered helpful guidelines for covering the mechanics of a pandemic election, we know our political problems run far deeper than election administration. The next several weeks could determine whether or not America will embrace authoritarianism or democracy. We need to act like it.

There are a lot of things that keep election officials up at night: cyberattacks, misinformation campaigns, interminable lines at polling locations, and ongoing political conflict over voting rules. But voter outreach groups are worrying about far more concrete problems, like making sure people fill out their mail ballots correctly.

Voting by mail is important for protecting public health this year. But casting a mail-in ballot involves a number of additional steps—many of which are new to voters—that they can mess up, including filling out forms, properly sealing envelopes, and mailing ballots on time.

In Ohio, one out of every 100 absentee ballots in the state’s primary were rejected. In North Carolina, voters are already getting ballots rejected for errors like “insufficient witness information”—and so far those rejections are roughly seven times more likely to affect Black voters than white voters. Thankfully, North Carolina requires election officials to notify voters when they make errors, but the process for doing so is subject to ongoing litigation.

Media outlets can help mitigate these problems with reliable, repeated communication. In previous elections, outlets may have simply shared information about how to register and when the polls were open. But this year, audiences need consistent updates about deadlines for requesting and mailing ballots, explainers about how to vote by mail, and reminders to follow public health protocols at polling places.

Analog solutions have a role, too. Ohio papers printed absentee ballot applications readers could tear out during the primary, a particularly important service for the 11% of households that don’t have a computer at home, let alone a printer. Outlets should also consider using advertising budgets to share voting information, a public service that might boost their reputations as trusted sources, too.

Despite good faith efforts to share information with voters, however, audiences are still getting misled on social media platforms. But mainstream outlets can help fight misinformation there, too.

Misinformation about mail-in voting is a serious problem on social media sites, especially Facebook. While the company has taken steps to display accurate information about voting, “organic” misinformation from conservative pages continues to pollute the platform.

This is no accident. Right-wing groups have invested millions of dollars building Facebook pages to spread propaganda, and these properties routinely produce the highest-ranking posts on Facebook, many of which spread misinformation about climate science, COVID-19, and voting by mail. Watchdogs say Joel Kaplan, a former Republican official who serves as the company’s vice president for global policy, shields high-traffic conservative pages from fact checking.

Media outlets can’t change Facebook policy, but they also shouldn’t treat misinformation like an endemic feature of our media ecosystem. Propaganda is a product and it’s made by people and institutions with specific political goals.

Calling this out is important. When people understand where misinformation comes from—for instance the oil industry’s decades-long funding of climate denial—they’re more likely to recognize the truth.

Accountability for misinformation peddlers may become even more important in the event of a contested election. 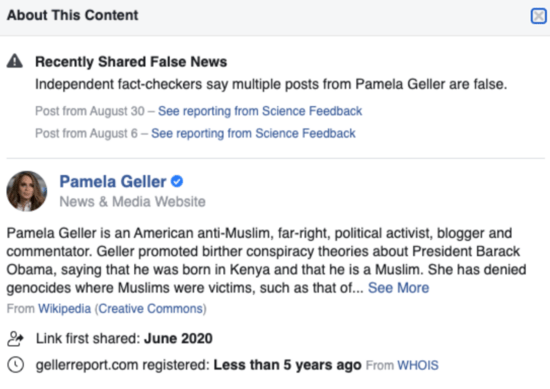 Facebook has begun flagging false information, but declines to state the facts.

Our democracy is at stake, let’s act like it

There are a lot of ways this election can go wrong. We have a president who routinely accuses his opponents of election fraud, refuses to acknowledge the possibility of conceding a lost election, and “jokes” about serving more than two terms.

Media outlets need to take these threats seriously, too. That means being realistic about the scenarios we face while also being clear-eyed about how outlets themselves can help invalidate politicians’ attempts to dispute election results.

Earlier this month, Axios erred in promoting a flawed analysis from Mike Bloomberg’s political data firm Hawkfish, which raised the spectre of President Donald Trump declaring victory on election night based on in-person voting, which is expected to favor Republicans, while Democrats rely more on mail-in ballots. They wrongly assumed mail-in ballots would be counted at a constant rate nationally, but states actually have different rules for when they can start processing ballots. In some swing states, like Florida, results will probably come in quickly. In others, such as Pennsylvania, processing can't start until Election Day.

That means network decision desks will need to be transparent about how they’re projecting results. In 2012, after the Fox News decision desk called the election for Barack Obama, Mitt Romney’s campaign said they were still waiting on more returns. Karl Rove, serving as an on-air expert, disputed the network’s call. So Megyn Kelly took viewers on a trip to the decision desk itself to get the facts.

This year, under similar circumstances, what would happen? Could Trump effectively contest a wide-margin victory for Joe Biden and Kamala Harris if Fox News doesn’t buy it?

Advocacy groups and labor unions are already planning for worst-case scenarios through Protect the Results. Sara Nelson, the head of the Association of Flight Attendants, has called on other union leaders to prepare for strikes after Election Day if the election is contested. Meanwhile, direct action groups like Shutdown DC have issued calls for volunteers to gather outside the White House after they’re done helping get out the vote.

But their voices are often absent from coverage about this very topic. In a recent essay, Yascha Mounk, a political scientist and writer for The Atlantic, treated a stolen election as something readers would passively witness as news consumers. His advice for Trump claiming that the election is fraudulent? “Ignore him.” Good luck with that.

Similarly, The New York Times highlighted seven Election Day “nightmares” from experts but didn’t give readers any guidance on how to wake up from them. David Brooks wrote a column entitled “What Will You Do If Trump Doesn't Leave?” without discussing the people and groups who are already answering his question. Thankfully, other Times writers like Michelle Goldberg have interviewed advocates who are working on these topics—and told readers how to get involved.

If the worst-case scenarios happen, a mass movement of Americans will rise up to secure a transition of power. That movement is already growing. It deserves a major voice in coverage, too.

Aaron Huertas is a political communications consultant who focuses on voting, digital organizing, and science communication. He runs a podcast, Close Read, which explores how political arguments work in practice. He lives in Washington, DC.
Give today to double the impact of your donation!

Donate Now →
Meet the woman behind North Carolina’s immigrant-owned mask sewing business
Tina Vasquez
Montgomery County residents debate eliminating school resource officers
Dalbin A. Osorio
What about the Black Latinx vote?
Jack Herrera
Home care workers and clients are in an impossible position during the pandemic
Vilissa Thompson
The future of LGBTQ+ families is currently with the Supreme Court
Elizabeth Brico
Follow us on social for stories the mainstream media isn’t covering.
BIPOC-led journalism like ours has never mattered more. Give today to double the impact of your donation.
Donate Now →
Election 2020: What’s at Stake
This election represents a chance for significant change on the major social justice issues of our time. Dive in to get...
Tribal Nations, Voting Rights, and Political Power
Ahead of the critical 2020 election, this series explores the current landscape of voting rights and the challenges Nati...
Sex Positivity and the Arts
Prism's new culture series hightlights sex positivity from the perspective of BIPOC communities
Stories that challenge the status quo — right in your inbox.