Iris De Anda’s family moved to the east Los Angeles neighborhood of El Sereno in 1982 when working class families could afford to purchase homes in the area. She was only three years old at the time. Today, De Anda is a member of Reclaim and Rebuild Our Community (RROC), a collective made up of largely women of color from El Sereno and nearby neighborhoods who are experiencing housing insecurity and are taking direct action to seek shelter.

On Nov. 25, the day before Thanksgiving, members of RROC reclaimed 20 publicly owned homes and were promptly evicted by the California Highway Patrol (CHP) within 24 hours. Some of the reclaimers were forcibly removed with the CHP dragging them away. The state owns dozens of homes in El Sereno that were purchased as part of a plan to extend the 710 freeway, a plan that is officially dead after communities fought for decades to stop the destruction that additional miles of freeway would have caused. Some of the state-owned homes have been uninhabited for decades. A staff member from state Sen. Maria Elena Durazo told Prism there are about 100 properties owned by the state that need significant work ranging from a few thousand dollars to $100,000 in renovations. The work varies from simple repairs to more complex problems with plumbing, wiring, and foundation retrofitting.

De Anda was among the reclaimers. She felt prompted to act because like other RROC members, her housing situation is tenuous. De Anda rents a room and has a landlord who is understanding for now, but she’s not sure how long she will be able to stay as she has fallen behind on rent. The temporary moratorium on evictions in Los Angeles County ends on January 31, 2021, although some lawmakers are pushing to extend it. Before the pandemic, De Anda was scheduled to travel and give talks to promote her book. The paid gigs that she had lined up for 2020 were canceled. She became involved in the taking of the homes because she wants a place to stay where her children can be with her. 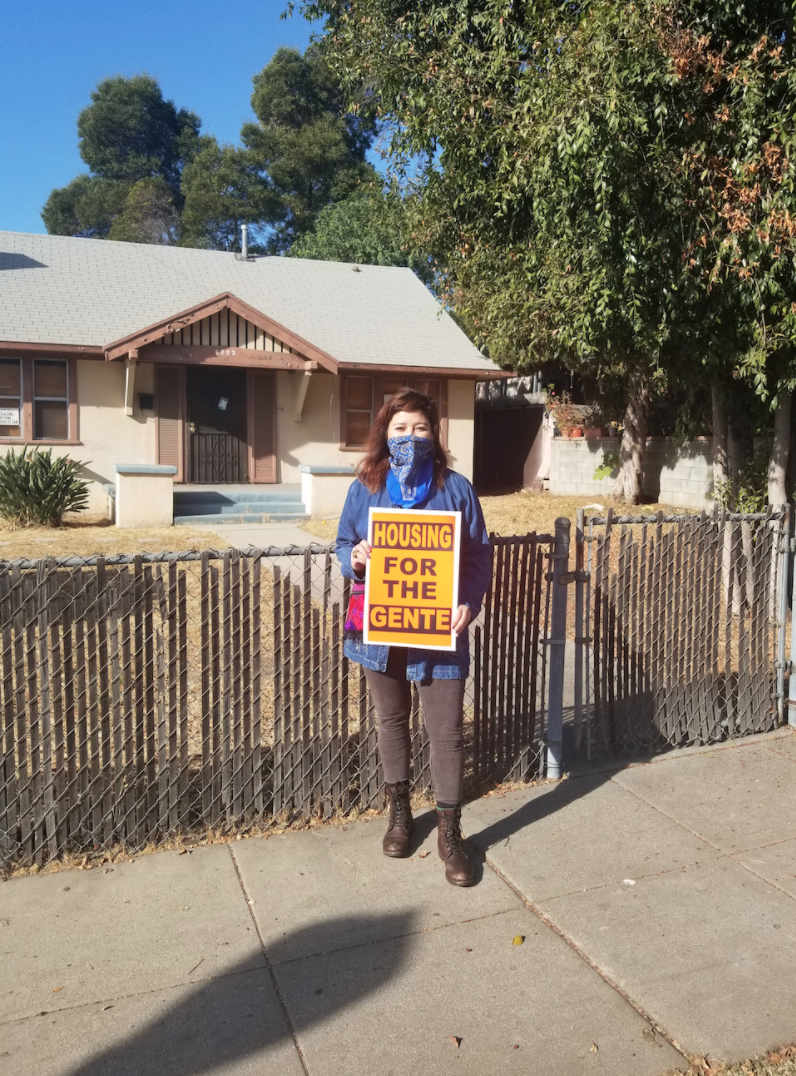 Iris De Anda stands outside of one of the state-owned homes that is boarded up and unoccupied in the El Sereno neighborhood of Los Angeles.

“This action was a huge risk,” said De Anda. "What we did was against the law to mainstream society, but I feel that the mothers in this group were trying to protect their children, especially now as COVID is surging and with stricter stay at home orders. Sometimes you have to be dramatic to get a response, and sometimes you don't get the response.”

When the action began, RROC addressed Gov. Gavin Newsom, asking him to have Caltrans, the state’s transportation agency that owns the homes, turn on the utilities and to let them stay to safely shelter in place.

Vee Serna, a single mother from the adjacent neighborhood of Highland Park, was also involved in the action that day. She has participated in the housing justice movement for years and lives in a building owned by a Silicon Valley investment firm. Serna has been through the process of rent striking, organizing with neighbors, and applying for assistance, but she’s currently five months behind on her rent.

Prior to the pandemic, Serna had been working at a nonprofit that provides services for families with developmentally disabled members, and she was able to take advantage of emergency family leave for 12 weeks during the initial stay-at-home order. Because her child is attending school remotely, she cannot return to her old job and has been living off the mutual aid of friends, dwindling savings, and her credit cards.

“I have tried to look for another place that I can afford, and it's almost impossible. And the last thing I want to do is to pull my daughter out of her school. I want that stability for her,” Serna said. “The rents in this community are outrageous, and the expectations that property owners have for tenants—requiring you to make three times the rent and have good credit—are impossible for families with one income.”

Both Serna and De Anda feel that they should not have to move from northeast Los Angeles, the community they grew up in and have ties to. RROC would like the vacant homes that are owned by the state to be sold to the El Sereno Community Land Trust, a nonprofit organization seeking to hold homes and land in stewardship by community members.

Alex “Purple” Liera is on the staff of the El Sereno Community Land Trust. She says that her organization has the resources and relationships with other organizations like Habitat for Humanity to make the state-owned, vacant homes habitable and up to date.

“We [the land trust] can create a system to make sure that community members in need get into these homes. We just need the city's support and the state to expedite the sale of these homes as quickly as possible. We want to be part of the solution to ending homelessness in our neighborhood,” Liera said.

Prism reached out to local elected officials who represent El Sereno at the city and state level, as well as the governor’s office. Only Durazo responded and submitted a fact sheet about her newly introduced bill, SB 51, which is a plan to allow for the sale of the state owned properties in the 710 corridor to “qualified Housing Related Entities including local government and nonprofit housing entities at the Agency’s original purchase price in exchange for a guarantee of providing 55 years of affordable and moderate-income housing.” Durazo’s staff member said the bill has an urgency clause.

It could take up to one year until sales of the homes can actually occur, assuming SB 51 passes and is signed by the governor.

Adriana Maestas is a freelance writer based in Southern California.
Give today and support BIPOC-led journalism!

Donate Now →
Nebraska activists want undocumented essential workers prioritized for COVID-19 vaccination
María Inés Taracena
Loved Amanda Gorman’s inaugural poem? Support more emerging Black poets and writers
Saba Keramati
Black women don’t need praise. We need leaders to take action.
Toni Wilson
How the anti-abortion movement fed the Capitol insurrection
Tina Vásquez
The child welfare system is another form of discriminatory policing
Elizabeth Brico
Follow us on social for stories the mainstream media isn’t covering.
BIPOC-led journalism like ours has never mattered more. Give today to double the impact of your donation.
Donate Now →
Women and the Death Penalty
Since the death penalty was reinstated in 1976, 16 women have been executed in the U.S.
Election 2020: What’s at Stake
This election represents a chance for significant change on the major social justice issues of our time. Dive in to get...
Tribal Nations, Voting Rights, and Political Power
Ahead of the critical 2020 election, this series explores the current landscape of voting rights and the challenges Nati...
Stories that challenge the status quo — right in your inbox.