Precious Cole moved to Durham, North Carolina, after breaking down in a phone call to her mother. She was struggling mentally, emotionally, and financially and to Cole, these three things were inextricably linked. Cole was working a fast food job and was homeless, only eating the days she went to work. Her meager paycheck did little more than allow her to sporadically rent motel rooms so that she could shower and have a roof over her head for a few hours at a time.

“I called my mother crying and pleading and she said, ‘Get on the bus, you’re coming here,’” Cole told Prism. That was two years ago. Now, at the age of 33, Cole has worked low-wage jobs in the fast food industry for nearly half her life. At the start of the pandemic, she was working two jobs just to make ends meet. Now she works full time at a Durham, North Carolina, Wendy’s. Because of her previous experience and her current role as a shift supervisor, she says she makes significantly more than her coworkers, but it’s still not enough to pay all her bills and put gas in her car so she can get to work each day. Her job is grueling and her days are long. Sometimes she works until 2:30 AM. and has just a few hours to decompress and sleep before returning to work. The COVID-19 crisis has compounded her exhaustion and heightened her stress. The other day, she said, an irate customer threw lemonade in her face.

“There has been all of this talk about ‘frontline workers’ and ‘essential workers,’ whatever people want to call us to make them feel better about themselves. But we don’t feel appreciated and we aren’t being treated like we are appreciated,” Cole said. “We are risking our lives and risking the lives and health of our family members and for what? To get paid next to nothing and so that y’all can eat at restaurants? People claim we are essential and I want them to show us that we are.”

Cole is a member of the Durham, North Carolina, branch of Fight for $15 called NC Raise Up that began in 2013 and represents a variety of low-wage workers, including fast food workers, gas station workers, dollar store workers, retail workers, and others advocating for an increased minimum wage. She joined during the summer last year after a COVID-19 outbreak at work was mishandled by management, forcing all of the employees to quarantine without pay. A coworker who was already part of the Fight for $15 movement told Cole it was time to make their voices heard and hold multi-billion dollar companies accountable. The experience has been empowering, she told Prism, and one of her primary motivators for joining the fight is to bring awareness to another crisis engulfing low-wage workers.

During the pandemic, low-wage workers risk their health and their lives to financially survive, but humming alongside COVID-19 anxieties are mental health issues directly linked to living below the poverty line.

“Everyone in these jobs is just basically surviving and when you are just surviving, your mental health is not the best,” Cole said. “The bills adding up just brings so much stress; you never have enough and then you add to that the fear that you will bring this virus home to your family. We are risking it all for a paycheck. Sometimes it’s too much and I just sit and cry. I try to be the happy shift supervisor at work that makes people laugh, but other times I feel like I walk in with a look on my face and they can tell something is wrong.”

Low-wage workers have spent nearly a decade fighting for an increased minimum wage and with a new White House administration, along with Democratic majorities in both houses of Congress, $15 an hour seems more possible than ever. However, Friday presented a setback. Senate lawmakers supported President Joe Biden’s $1.9 trillion stimulus package, but dismissed a measure that would raise the federal minimum wage to $15 an hour. 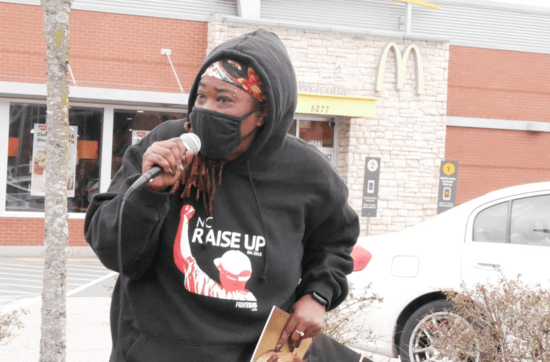 The need for an increased federal minimum wage has always been immediate, and the economic benefits of raising the minimum wage from $7.25 to $15 an hour are well documented—from reducing unemployment and generating $107 billion in higher wages to lifting the wages of nearly 40% of Black workers and helping to reduce the racial wage gap. However, what is not discussed enough is how putting more money in workers’ pockets could take significant steps toward alleviating anxiety, depression, and other mental health issues.

Poverty is one of the most significant social determinants of health and mental health, the Psychiatric Times reported, and women of color experience poverty in disproportionate numbers—this is especially true among women of color low-wage workers.

According to a 2018 report from the Congressional Research Service, 56% of poor people were women and while the largest share of people in poverty were non-Hispanic white, the majority were not. Almost all other racial and ethnic groups were overrepresented among the poor, relative to their prevalence in the overall population. The majority of people in poverty were working-age adults ages 18-64, more than 77% of whom were working and still in poverty.

A 25-year observational study published last year explored whether minimum wage policies had an impact on the rate of people who die by suicide, which can be caused by financial stressors such as job loss, financial hardships or debt. Researchers found that a $1 increase in the minimum wage resulted in an estimated 3.4% to 5.9% decrease in suicide rates among adults ages 18 to 64, and a $2 increase could have prevented an estimated 40,000 suicides alone between 2009 and 2015.

Cole says while a $15 federal minimum wage would make a significant impact, she knows it doesn’t go far enough to cover even basic necessities like housing, child care, food, transportation, and health care. Still, she said it’s a “good start” that could help alleviate some of the overwhelming financial stress that burdens workers’ lives.

“They say money can’t buy happiness, but it kind of can. There were days where I really thought about stepping into traffic because I thought it would be easier; because I wouldn’t have any more worries or stress and I wouldn’t have to think about where my next meal was coming from,” Cole said. “Mental health is the number one reason I’m in this fight, but I’m not going to pretend like the money isn’t important. Black people make less than white people and women make less than men, so imagine my circumstances as an African American woman.”

Cole also pushes against the narrative that everyday workers should simply work to survive. She told Prism she’s fighting for a world where women like her can buy things they want; not just things they need. Where women like her can go on trips because they want joy and relaxation. Life is about more than stress and financial strain; it’s about more than balancing checkbooks and trying to figure out how much money she has to survive off until payday, she said.

“What people need to understand is that what we are asking for is base level. Right now, working people don’t even have basic needs met. They can’t afford to live; they can’t afford to eat. People are falling apart,” Cole said. “I know we’re going to get $15, it’s just a matter of when. When we do get it, we are still going to organize and have our voices heard because there’s a lot more to fight for.”

Tina Vásquez is the senior reporter at Prism. She covers gender justice, workers' rights, and immigration. Follow her on Twitter @TheTinaVasquez.
Give today and support BIPOC-led journalism!