Last month, a fire destroyed the home of six food delivery drivers in the community of Bensonhurst, Brooklyn, in New York. Within two days, hundreds of people had already donated over $20,000 to their online fundraiser so they could replace their belongings, including the bikes they use for work, and move into a new apartment. This was a beautiful manifestation of the grassroots mutual aid efforts among immigrant workers and allies that have heightened during the pandemic. The delivery workers who lost their homes are members of Los Deliveristas Unidos, a New York-based group led by Indigenous people from Guatemala and Mexico fighting for their rights.

“If the government isn’t willing to support them, they have an entire community that recognizes and cherishes them,” Ligia Guallpa, executive director of New York’s Worker’s Justice Project, of which Los Deliveristas Unidos is a part of, told Prism. “Immigrant workers are facing a direct attack [during the pandemic]. It is they who don’t have economic relief, who were left without jobs, without being able to pay rent, without food. There is no way of surviving this crisis without organizing as a community.”

Not only have food delivery workers been among the most vulnerable to contract COVID-19, but they’re risking their health while continuing to make poverty wages, often relying on tips and facing wage theft from delivery apps, while navigating the dangers of New York City traffic on bikes and enduring abuse from some restaurant owners who don’t even allow them to use the bathroom.

Structural violence against food delivery workers was present long before the pandemic, and it’s what triggered food delivery workers like Gustavo Ajche to rise up. Ajche is one of over 200 workers across the city organizing with Los Deliveristas Unidos. They’ve helped lead protests demanding city officials to enact policies that protect delivery and gig workers. Many of them are Maya K’iche’ and from other Indigenous communities in Guatemala and Mexico who fostered a network of solidarity and warmth thousands of miles away from their motherlands.

In a conversation with Prism in January, Ajche spoke to us about some of his memories from Guatemala and what inspires him to resist. Here he is, in his own words, which have been condensed and edited:

I’m from Totonicapán, Guatemala. My parents pressured me to get married when I was 16 years old. My wife was 15 years old. We were just teenagers. We’ve been married for over 20 years. That’s when my migration began. From Totonicapán, me and my wife left for Sumpango, Sacatepéquez. I followed in my father’s footsteps. He worked in crafts. I learned this profession from him. After school, during my free time, I’d help him with his business too. While living in Sumpango, I dared to start my own business. I took a risk. I was working for a cooperative that imported crafts and products from Guatemala to the United States.

I’ve been in New York since 2004. Three or four years later, my wife joined me. She’s a very hardworking woman. She hasn’t stopped working since coming to this country. [Since migrating to the U.S.], we’ve been able to buy a house in Guatemala. My two children are grown now. I haven’t seen them since they were little. They stayed in Guatemala with a person we trust who treats them as if they were their children. But I’m happy. My daughter is in college. She’s 19. And my son is starting at the university. He’s 17. She’s studying psychology and he’s studying engineering. I’ve always reinforced that studying and getting a good job is the best future for them. We are here so that we can pay for their education. 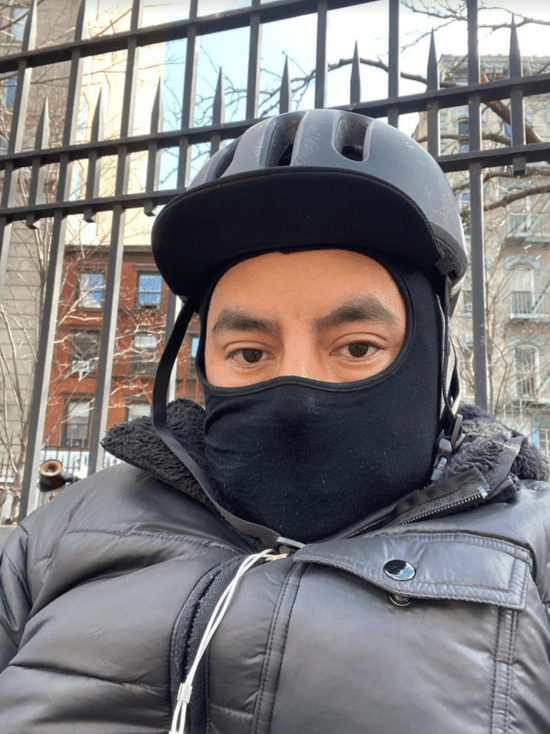 When I work in construction, I start my day at 7 AM. Some weeks I have work, others I don’t. That’s why I started food delivery work so that I can pay my bills. [If I do construction], I get home at around 3:30 PM. I shower, I eat, and sometimes clean the house. Then I take the subway [to go to the area where I deliver food] and start at around 5 PM. Sometimes I return home at like 11 PM. That’s when me and my wife eat dinner and we talk. We call our children and ask them how school is going. That’s our daily routine. On Wednesdays, I volunteer at the Worker’s Justice Project to help distribute food to people in the community. I joined the organization when I first came to New York. A friend recommended it to me. I liked it because they told me they could help me in cases of wage theft. We started providing food assistance to maybe 60 people in the Bensonhurst neighborhood in Brooklyn. Now we have some 500 people stand in line to pick up a bag or box of food—people from Guatemala, Mexico, Honduras, China, India, even Russia. There are so many languages we don’t understand, but we understand each other when it comes to food.

Here in Bensonhurst, we’re in constant contact with each other. There are also people from my village in Guatemala, Chimente, Totonicapán, living here in the community. We know each other and we always help each other. That’s how Deliveristas Unidos emerged. As immigrants, we don’t have the privilege of staying home and getting a check from unemployment. We’ve been treated unjustly. Some restaurants [we deliver for] don’t let us use the bathroom. Delivery workers are also helping restaurants stay afloat during the pandemic. We are essential, but a lot of people don’t treat us that way. That’s what we’ve been fighting against with the Worker’s Justice Project and Deliveristas Unidos. We take care of each other. If an area is dangerous or there are bike thefts, we alert each other. We get worried about getting sick because of medical expenses. We try to be as healthy as we can. I know a lot of people who I think contracted the coronavirus, but they didn’t want to go to the hospital. There is a lot of fear.

What keeps me and my wife with hope is our children and working so they have a better future. We’re poor and [didn’t have many opportunities]. Through the Worker’s Justice Project, I’ve been able to take workshops on leadership. Here we are fighting, trying to move forward no matter what the conditions are.

Someone asked me recently what I thought of the new government, if I have optimism. I don’t want to get my hopes up, but there are moments where I dream and think, “I hope I get my papers.” I’d travel back to Guatemala, see my family, see all the beautiful places I couldn’t see. I have to go back one day. But then I come back to reality. Despite everything, I’m doing well. I’m happy because New York is a good city that has taught me so much. Nothing is easy in life. We have to fight.

Reporter’s note: Shortly after my conversation with Ajche, New York Gov. Andrew Cuomo announced food delivery and restaurant workers could be added to the COVID-19 eligibility list, just a day after saying they would have to wait longer. Food delivery workers like Ajche celebrated the news. In an interview with the New York-based publication The City, he said, “It really makes me feel good for our work to finally be recognized as essential. Little by little, people are waking up to all the hard work that we do.”

María Inés Taracena is a contributing writer covering workers’ rights at Prism. Originally from Guatemala, she's currently a news producer at Democracy Now! in New York City focusing on Central America and asylum seekers, among other stories.
Give today and support BIPOC-led journalism!